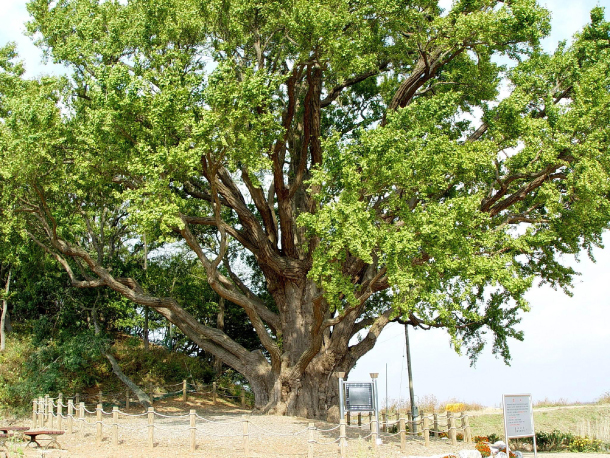 A ginkgo tree, which is about 800 years old, located on Boreum Island in Ganghwa, Incheon, is South Korean Natural Monument No. 304.

BOREUM ISLAND, Incheon - Boreum Island, a small speck of land inside the Northern Limit Line (NLL), played host to an important birthday party on Friday. Many of the 230 residents on the island headed to a small hill on the island for the celebration, where a buffet and traditional performances were held by the Cultural Heritage Administration, the Korea Cultural Heritage Foundation, Ganghwa County Office and the Island Research Center.

Villagers started arriving at the tree at 11 a.m., taking seats under a large canopy set up to protect them from the heat. The island is usually a quiet place, said one of the residents, but he wouldn’t “miss the tree’s birthday party for the world.”

There’s a reason why this tree gets such special treatment. 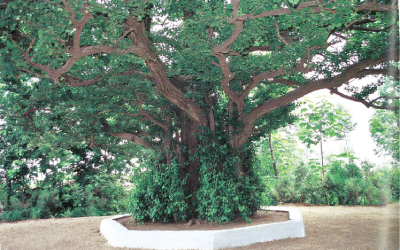 Ginkgoes, unlike many other plants, are dioecious, meaning they have separate sexes. The gingko on Boreum Island, which is about 24 meters tall with a circumference of about 9 meters, is a male tree that is South Korea’s Natural Monument No. 304. It is said that the tree was originally planted as a couple next to a female tree in North Korea’s Honam-ri in Yeonan County, Hwanghae Province.

The story goes that about 800 years ago a flood hit the region and the male tree was uprooted and drifted down to Boreum Island. The residents on the Boreum Island rescued it and replanted it in its current location.

According to the Cultural Heritage Administration, long before the Korean War separated the North and South, fishermen in Boreum Island and Honam-ri used to keep in touch with each other to make sure that they all held ancestral rituals in front of their respective trees on the same day every year to pray for good health and a big catch of fish. These practices have stopped since the Korean War, although the female ginkgo tree in Honam-ri is designated as North Korea’s Natural Monument No. 165.

The Cultural Heritage Administration decided to revive the annual tradition on the South Korean side because of the revival of inter-Korean relations, explained Kim Jong-jin, head of the administration.

“There have been numerous peaceful exchanges and joint events organized between the two Koreas,” said Kim. “In that sense, reviving this annual event that used to be co-organized by the North and South before the division for the first time in 60 years seems significant.” Kim added that the administration will make efforts to make this a joint event again while the Koreas are on good terms.

From left: Kim Jong-jin, head of the Cultural Heritage Administration, speaks at a birthday event organized in front of the male ginkgo tree in Boreum Island on Friday. Traditional dancers from Korea House perform to celebrate the tree’s 800th birthday. [CULTURAL HERITAGE ADMINISTRATION]

Aug. 17 probably isn’t actually the tree’s birthday. The date was selected because it was July 7 on the lunar calendar, the date of the Chilseok festival in Korea, or the double-seven festival. The festival celebrates the annual meeting of a mythical cowherd and weaver girl.

Since the festival celebrates a romantic legend, Kang Jong-wook, deputy governor of Ganghwa County, said that they wanted to select the day as the tree’s birthday, hoping that the male tree on Boreum Island “could one day meet his wife in North Korea at least spiritually once a year, by reviving the annual event by the two Koreas.”

Residents were happy to see the tree enjoy its special day again.

“We are thankful that the government is helping to revive the annual tradition that has long been forgotten,” said Kang Byeong-man, 83, who came to the event on Friday. “The tree has a special place in our hearts. Whenever we go past it, we pray for peace and stability of the village and also think of our friends and family over in North Korea, wishing one day we could meet again.”

Although the Cultural Heritage Administration is confident that it will “find ways to perform the ritual on the same day through inter-Korean cooperation,” it won’t be an easy task.

Jeon Gi-sun, director at the Cultural Heritage Administration’s Natural Heritage Division, said he had sent letters to North Korea asking for a recent picture of the female ginkgo tree in Honam-ri so that they could at least show the Boreum Island ginkgo a picture of his long-lost wife at Friday’s event. The plea went unanswered.

“It is good that the relationship is improving, but because there are so many requests from so many different organizations at the moment, I think it will take time for us to realize that hope of restoring the joint event,” Jeon said.