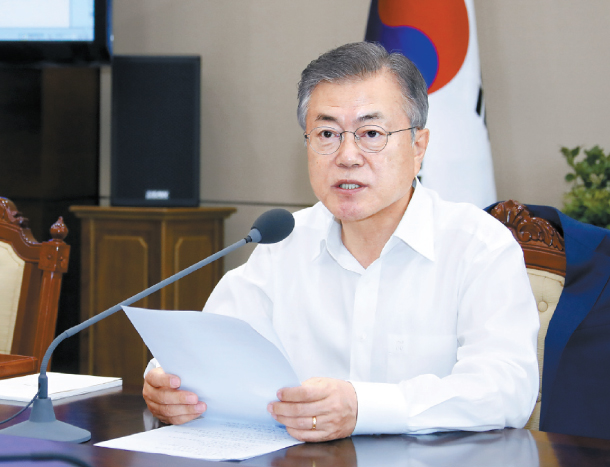 President Moon Jae-in speaks in a meeting with his top presidential aides held at the presidential office in central Seoul. [YONHAP]

The hikes in the minimum wage that were supposed to help lower income workers is hurting them, as the number of temporary and day-to-day jobs plummeted.

According to a Statistics Korea job report, there were 232,000 fewer jobs for temporary workers and day-to-day hires in July compared to the same period last year. These are mostly positions in restaurants and on construction sites.

This was in stark contrast to the 272,000 jobs that were added in July compared to a year earlier for employees with contracts that last longer than a year.

More specifically, 108,000 temporary jobs disappeared compared to a year ago while day-to-day jobs saw an even sharper decrease of 124,000.

Temporary jobs have contracts of less than a year while day-to-day jobs last less than a month, as on construction sites.

The disappearance of jobs is being blamed on two hikes in the minimum wage, which is a key pillar of the Moon Jae-in government’s so-called income-led growth policy.

The main idea of that policy is that employees on the bottom rung would earn more after the minimum wage was raised and start spending more, raising the revenue of businesses across the board including manufacturers to the benefit of the overall economy.

Small businesses - the usual employers of such temporary or day-to-day workers - warned from the start that it would not work that way. They are strongly against another major hike in the minimum wage set for next year.

This year, the minimum wage was raised 16.4 percent, the highest rate since 2001, and next year it will be raised an additional 10.9 percent.

A recent National Tax Service study found that small businesses like restaurants were under intense stress.

“Although the government is not clearly acknowledging that the minimum wage is having a negative effect on the job market, when you look at the sharp losses of temporary jobs and day-to-day job as well as jobs in wholesale and retail, it’s clear that the minimum wage is the biggest reason,” said Oh Jung-geun, a Konkuk University professor of finance IT. “If the results are turning out to be the opposite from what the government had intended, they need to acknowledge it and change their policy course.”

In hopes of turning the mood around, the government has said it will announce measures to support small businesses on Aug. 23.

Spooked by the alarming job numbers, Moon told government and Blue House top officials that their jobs are on the line.

“My heart is heavy watching the job situation not improve and actually get worse,” Moon said on Monday during a senior aides meeting at the Blue House. “The Blue House and the government economic team should work with perfect teamwork and realize that their jobs are on the line to [give the public] the faith that the government is doing its best in a difficult job situation.”

Moon added that the government should aggressively utilize tax revenues that have been collected.

“At the same time [the government] should further speed up strengthening innovative regulation [changes] and promote a fair economy so that the private sector will be able to expand their investments and employment,” Moon said.

“In policies, what should be most feared is losing the trust of the people.”

Moon’s popularity vote has been falling due to the failure of his economic policies.

It was clear from a Sunday meeting among the government, the Blue House and the ruling Democratic Party held in Yeouido, western Seoul, that there is ongoing discord.

Finance Minister Kim Dong-yeon and Jang Ha-sung, the Blue House top policy aide and former economy professor who designed the income-led growth policy, were at odds on the impact of the minimum wage hikes.

Kim hinted at change in the government’s policy on income-led growth, while Jang asked the public to be patient.

The Blue House on Monday tried to downplay any disagreement between Kim and Jang.

“How can both men say the same exact same words?” asked a Blue House official. “Each could have a different approach.

“Jang commented that the government will continue to push forward with the policy direction and philosophy unwaveringly while Kim talked about difficulties in reality and how to solve these problems.”