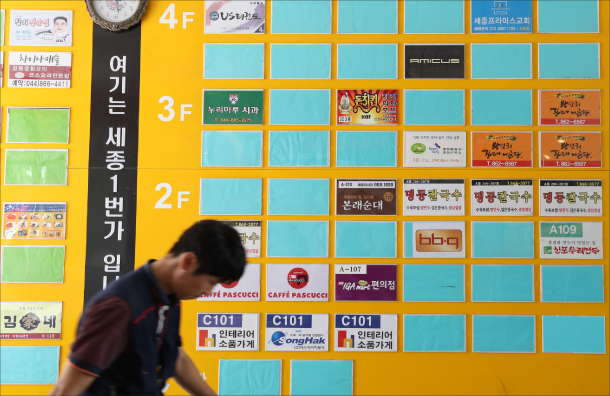 A man walks by a floor directory of a building near Sejong Government Complex on Wednesday. The directory shows many units in the building are vacant. [YONHAP]

The income gap in Korea widened again in the second quarter, a serious blow to the so-called income-led growth policy of the Moon Jae-in government, which vowed to narrow the inequality in earnings between the rich and poor.

According to data released by Statistics Korea on Thursday, earnings for households in the first quintile of income brackets, the bottom 20 percent of the population, retreated 7.6 percent in the second quarter compared to a year earlier.

Households in the second and third quintile also saw their incomes fall by 2.1 and 0.1 percent - whereas the rich folk kept getting richer.

The average income for people in the fourth quintile went up by 4.9 percent and for the fifth quintile by 10.3 percent.

A similar trend was spotted from January to March this year, when people in the first and second quintile experienced 8.0 and 4.0 percent drops in their incomes while people in the fourth and fifth quintiles saw gains of 3.9 and 9.3 percent compared to the previous year.

The total distribution ratio for disposable income - a barometer of earnings equality - was 5.23, which means the earnings of those in the fifth quintile were 5.23 times higher than those in the first quintile.

That figure indicates that the Korean economy is facing the worst level of income inequality since 2008 when the ratio for the period of April to June came to 5.24.

Officials from the Finance Ministry blamed the aging of Korea’s society and other long-term problems such as ongoing slumps in certain sectors like shipbuilding.

“The Korean economy is suffering from a lack of domestic demand [for goods and services], a result of massive restructuring we have seen in the manufacturing sector since 2015,” said Park Sang-young, a director at Statistics Korea. “It seems like this situation is taking a toll on those in the first quintile of the income group.” Statistics Korea is run by the Finance Ministry.

The statistics agency explained that the number of employed in households in the first quintile has shrunk from 0.83 per household last year to 0.68 per household this year, an 18 percent fall.

For households in the fifth quintile, on the other hand, the number of workers rose from 1.99 per household last year to 2.09 this year, a five percent increase.

But the data released on Thursday coupled with a jobs report from last week - which showed only 5,000 jobs being added to the economy in July - has deeply troubled some analysts.

Some economists are blaming the Moon administration’s relentless push to raise the minimum wage for the worsening situation.

For the Moon government, the minimum wage hike is a key pillar of its “income-led growth” policy.

Its logic is that by pushing up the minimum wage, workers in the first and second quintiles would see their income go up, which was supposed to make workers wealthier, willing to spend more and meant to translate into greater hiring by businesses.

But the effect has been much less hiring of workers than in the past, particularly in minimum wage jobs, and a measurable widening of the income gap.

“The drastic hike in the minimum wage has little impact on those in the upper group of the income bracket,” said Yun Chang-hyun, a professor of business at the University of Seoul. “But for those in a more vulnerable position, it robs them of their jobs.”

Despite such concerns by some analysts, the Korean government is adamant about its policies.

Kim Dong-yeon, Korea’s finance minister and deputy prime minister for the economy, said on Thursday during a budget meeting at the National Assembly that the government will propose a budget plan next year that contains “the biggest budget allocated for jobs in history.”