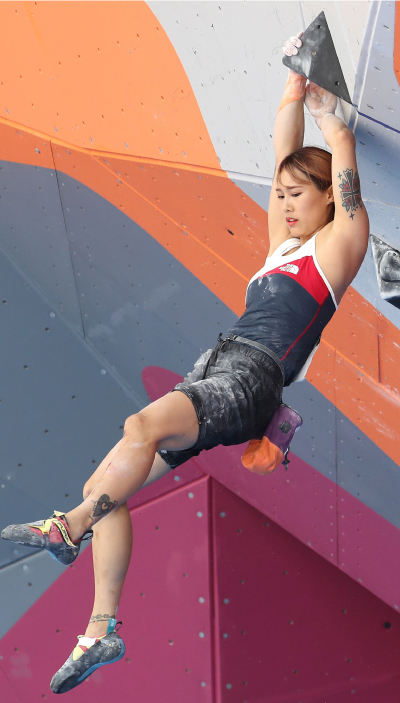 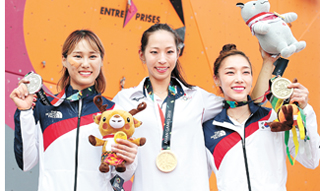 From left: Sa Sol, Akiyo Noguchi of Japan and Kim Ja-in at the medal ceremony for the women’s sport climbing combined event at the Asian Games at the Jakabaring Sport City Sport Climbing Center on Sunday. [YONHAP]

Sa finished the event with a total of 12 points, after coming first in speed, fourth in bouldering and third in lead. Although Sa and Akiyo Noguchi of Japan were tied for the lead at 12 points after all three events, Noguchi was determined the gold medalist based on her finishes in each discipline.

“I’m very happy to win bronze,” Kim said after the race. “Since it was my first-ever Asian Games, I had a lot of pressure and was very nervous. It was a big challenge for me to compete in all three events [including my main event, lead]. I tried by best and that’s the reason for my tears.”

In the combined events, three climbing disciplines are contested - speed, bouldering and lead - and the climber with the lowest points after all three events wins. In speed, the climber that climbs the 15 meter (49 feet) wall the fastest is the winner. Bouldering requires climbing short obstacles without a rope, and in lead, climbers are required to climb the wall within a certain time frame.

Kim, who started the sport in sixth grade along with her brothers, is the two-time IFSC World Championship champion in the lead event and was frequently mentioned as a favorite for the inaugural competition at the Asian Games. Since lead was not a standalone event, Kim had to make her Asian Games debut in the combined event.

Sa, who started the sport in fifth grade, may not be as well-known as Kim, but is often rated Korea’s top female climber along with Kim, and has been sweeping gold in domestic events since middle school.

Now, the two will focus on competing in Tokyo in 2020, when sport climbing will make its Olympic debut.