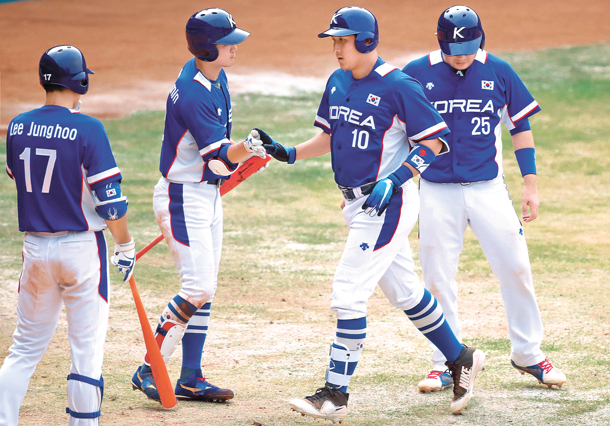 The Korean baseball team celebrates after Hwang Jae-gyun, third from left, hits a grand slam during a preliminary game against Hong Kong on Tuesday. [YONHAP]

Korea lost to a team of amateurs to start the Asian Games baseball competition last Sunday. And now the team of professionals must avoid falling to another group of amateurs just to have a shot at winning Korea’s third-straight gold.

Korea’s three-peat bid will begin in earnest today with a crucial match against Japan in the super round.

From two groups of four, Korea and Taiwan have reached the super round as the top two teams from Group B. They will face the top two from Group A, Japan and China, once each.

And after those two games, the top two nations will go on to meet in the gold medal game on Sunday. A loss for Korea in the super round will mean a relegation to the bronze medal game.

Though Japan has sent amateurs rather than its top pros from Nippon Professional Baseball (NPB), Korea by now knows better than to underestimate these non-pros.

Korea pounded Indonesia 15-0 and then beat Hong Kong 21-3. That final score is inflated because Korea put up a 10-spot in the top of the ninth, and it also masks the fact that Hong Kong hit a home run off Korea and was only trailing 5-2 through five innings.

That opening loss to Taiwan may well prove costly for Korea in the super round. Per tournament rules, the two qualified teams’ head-to-head record from the preliminary round carries over to the super round.

This means Taiwan now has one win to its credit while Korea has one loss at the start of the super round.

From Group A, Japan has one built-in win and China has one loss. And here’s where things can get complicated.

If Taiwan and Korea both win two games in the super round, then they will clash in the gold medal game.

If Taiwan beats China but loses to Japan while Korea wins both of its games, then Korea, Taiwan and Japan will all end up with two wins and one loss.

In that scenario, they’ll have to go to a tiebreaking formula called Team’s Quality Balance (TQB). It’s an index of (runs scored/innings the team batted)-(runs allowed/innings the team pitched). The two teams with the highest TQB will advance to the gold medal game.

While Korean bats put 36 runs on the board in the past two games, that explosion has to be taken with a grain of salt given the quality of those opponents.

Korea managed one run against amateurs of Taiwan, who may not be as good as amateur pitchers from Japan.

After the win over Hong Kong, Korean manager Sun Dong-yol said he was concerned about how much pressure his players were putting on themselves, especially those batting in the middle of the lineup.

Cleanup hitter Park Byung-ho, one-time Minnesota Twin, has gone 4-for-11 in three games, and only got his first home run in the ninth inning against Hong Kong when the outcome was all but decided.

Kim Hyun-soo, formerly with the Baltimore Orioles and Philadelphia Phillies, is off to a 2-for-8 start with no extra-base hit, and is playing on a wonky ankle after rolling it over the second base bag against Indonesia.

Infielder Hwang Jae-gyun, who had a cup of coffee with the San Francisco Giants last year, has batted eighth - a spot typically reserved for the team’s weakest hitter - in all three games, but he’s been easily Korea’s most dangerous hitter.

Hwang leads the tournament with three home runs and nine RBIs while slugging at a 1.273 clip.

It would seem to make sense to move Hwang up in the order for upcoming games, but manager Sun said Tuesday he didn’t want to commit to immediate changes because he wants to see his big boppers pull themselves out of their slump.

“As their manager, I just want to make sure they can start feeling more comfortable and playing the way they’re capable of playing,” Sun said. “They’re all very talented players.”