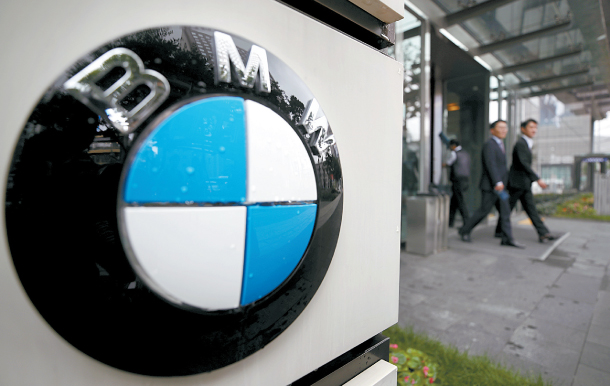 The BMW logo at the entrance of the German automaker’s Korean office in Jung District in central Seoul on Thursday. [YONHAP]

Police raided BMW Korea’s headquarters Thursday morning in search of evidence that proves that the German carmaker attempted to hide defects related to the engine fires that plagued Korea over the summer.

A warrant was issued on suspicion of a violation of the automobile management act, the local police said.

Some 30 investigators from an intellectual crime unit at Seoul Metropolitan Policy Agency raided the office in Jung District, central Seoul, at around 9:30 a.m. on Thursday.

Investigators were looking for documents linked to the latest fire crisis including emails between the company and the German headquarters and other materials related to the emission gas recirculation (EGR) systems that BMW claims are the reason for the fires.

Thursday’s raid was the first time the Korean police has ever raided the German carmaker’s office.

The police said it will “secure evidence to roll out a strict investigation into the case.”

Three weeks ago, some 41 owners of BMW vehicles in Korea filed criminal charges against BMW Korea and its German headquarters and executives, claiming that they had concealed the defects and possibility of fire even if they had known about it since 2016.

BMW Korea said it will “cooperate with the police.”

Lee Kwang-deok, the owner of a burnt-out BMW 520d vehicle who is leading the so-called BMW victim group, requested the police investigation, arguing that the German carmaker could hide evidence or provide incomplete reports to the Korea Transport Ministry.

“The raid was carried out exactly 21 days after the first criminal complaint was filed,” said Ha Jong-sun, the attorney at Barun Law handling the case.

“Through the latest raid, I hope evidence that could act as a smoking gun in this case can be secured so that the truth on whether BMW attempted to hide defects can be revealed,” he added.

Meanwhile, two petrol BMW vehicles that were not included in recalls have caught on fire in the last two days.

On Thursday morning, a 320i model caught fire while driving in Nowon District, eastern Seoul. On the previous day, a 528i model also caught fire, this time while parked, in Paju, Gyeonggi.

Meanwhile, the Korea Consumer Association will claim compensation worth more than 15 billion won ($13.5 million) today on behalf of some 1,226 BMW owners in Korea.

Heon Law, who is in charge of this case, said Thursday that it will also apply for the provisional attachment of the BMW Korea headquarters and its driving center in Incheon and other logistics centers as the total compensation amount is significant.