An Asian Games gold and a new lease on life

An Asian Games gold and a new lease on life 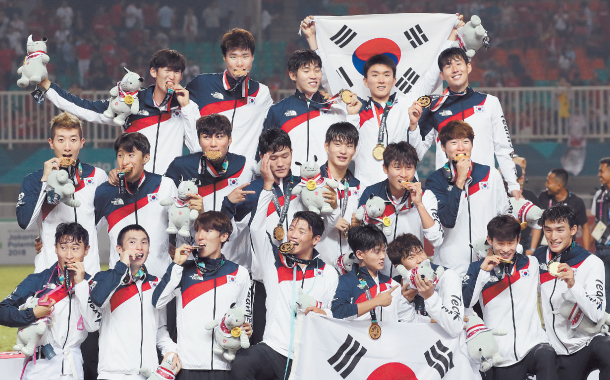 Members of the Korean U-23 football team pose with their gold medal after defeating Japan 2-1 in the men’s football final at the 2018 Asian Games at Pakansari Stadium in Cibinong, Indonesia, on Saturday.[YONHAP]

When Korea beat Japan in the final match of the men’s football contest at the Asian Games on Saturday, a huge sigh of relief probably rang out across London. With the gold medal, Son Heung-min of Tottenham Hotspur was guaranteed an exemption from Korea’s mandatory military service. 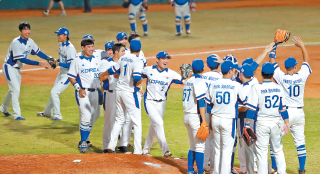 The Korean baseball team celebrates their 3-0 win over Japan in the gold medal game at the 2018 Asian Games at Gelora Bung Karno Baseball Field in Jakarta, Indonesia, on Saturday. [YONHAP]

Just like in the quarterfinals, Korea left it to the very last minute to pull ahead. Finishing regular play without any goals, Korea finally started scoring in the first half of overtime. Lee Seung-woo and Hwang Hee-chan each scored a goal, both assisted by Son, to quickly take Korea’s lead to 2-0. In the second half of extra time Japan pulled back a goal, but failed to overcome the deficit before the final whistle.

“We scored a couple of goals and also gave one up,” Son was quoted as saying on Yonhap. “It reminded me of the fact that a lot can happen so quickly in football. When I saw our fans waving the national flags in the stands at the end, I was incredibly grateful.”

Not only did a gold medal mean a title defense at the Asian Games, Korea has now become the team with the most wins in men’s football at the Asian Games, with five. Prior to this year, Korea was tied for the record with Iran. The victory also meant that all 20 members of the U-23 Korean national football team were guaranteed an exemption from mandatory military service.

Son’s exemption made headlines around the world, not only because of his fame, but also because it was his last chance at avoiding the military. If Korea had missed out on gold then Son’s glittering international career would have been derailed by nearly two years in the military.

If Korea didn’t win gold at the Asian Games, it would have been a very big financial loss for Hotspur, as they recently re-signed a contract with Son which runs through 2023.

But Son wasn’t the only Korean athlete to walk away from the Games with a golden ticket out of the military.

Korean male athletes who win an Asian Games gold or any Olympic medal receive an exemption from their mandatory military service. Athletes like Hwang In-beom on the football team, who have already started their military service, are now eligible for immediate discharge.

For many older athletes, this year’s Asian Games was the last chance at an exemption. While most of the players on the U-23 football team would probably have gotten another chance to avoid military service if Korea had not won gold, for the wildcard players it was a different story.

While for two of the older players - Son and Hwang Ui-jo - a military service exemption means their careers in foreign leagues can continue unimpeded, for Daegu FC goalkeeper Jo Hyeon-woo it could open doors that he hadn’t realized were an option.

Jo’s star has risen incredibly quickly this year. The Daegu goalie was relatively unknown before the 2018 FIFA World Cup, where he suddenly emerged as the biggest star of the Korean team. Though Korea failed to advance to the knockout stage, Jo showed his strength in the match against Germany, shutting down any chance of scoring a goal. Jo was selected as the man of the match for the game and was even selected by BBC readers as the goalkeeper for a “best eleven” team based on group stage results.

After an impressive World Cup, Jo was reported to have received offers from foreign clubs but was unable to finalize any contracts as he still hadn’t completed his military service. Now that Jo has earned an exemption, he is free to pursue career opportunities overseas, quite possibly even becoming the first ever Korean goalkeeper to compete in a European league.

“I will try to show fans that I can play in Europe, so I hope I can get some fan support,” Jo said after winning the gold medal on Saturday.

With a 3-0 shutout win against Japan in the gold medal baseball game at the 2018 Asian Games, also on Saturday, nine baseball players earned their military exemption. With the win, Korea successfully defended their Asian Games title for the third straight time and has now won five of the seven baseball titles.

Despite another successful Asiad, the baseball team has continuously received criticism.

When manager Sun Dong-yol announced the roster in June, fans were unimpressed by the addition of Oh Ji-hwan of the LG Twins and Park Hae-min of the Samsung Lions. The two players - not really thought to be the strongest in their categories - are too old to substitute their military service with time on the Police Baseball Team or the Sangmu Phoenix, the military teams in the Futures’ League.

Their inclusion on the national team seemed to many people like a transparent bid to avoid military service, rather than a selection based purely on merit.

The gold medal was good news for the KBO, especially the Nexen Heroes. Of the nine players, three play for the Heroes, two for the Lions and Doosan Bears. The Twins and the NC Dinos each had one player receive an exemption.

Amongst the players that received exemptions, Lee Jung-hoo of the Heroes received the most attention after the Games. The 20-year-old outfielder was added to the team at the very last minute but was one of the most crucial members as leadoff. At the Asian Games, Lee had a batting average above .400.

While athletes in football and baseball, as well as bowling, rowing and combat sports got to earn their exemption by working together as a team, in some sports, like fencing and archery, the competitors had no choice but to compete against each other for an exemption.

In the fencing men’s individual sabre event, Team Korea had a bittersweet victory as Gu Bon-gil became the first fencer in Asiad history to defend his individual title for a third consecutive Games, but at the expense of his teammate Oh Sang-uk.

The win meant a lot for both fencers - Gu got to make history, but Oh would have had a shot at a military exemption.

Although Gu took away Oh’s chance by defeating him 15-14 in the final, it wasn’t the end of the road for him. Both fencers still had a chance at another gold in the men’s team event, and Gu was determined not to let his teammate down.

“I am obviously happy to win, but I also feel pretty bad about the situation,” Gu said after the match. “He could have benefited from gold here. I’ll try to win the team gold so that he’ll have that in the end.”

Gu kept his promise - the men’s sabre team won gold in the team event and Oh earned his military exemption.

Oh and the men’s sabre fencing team had a happy ending at this year’s Asiad, but in men’s recurve archery it was a different story.

Much like with Gu and Oh, the men’s recurve archery final was an all-Korean affair. The difference was that the Korean team had already come in second in the team event, meaning that the individual event was the last chance for Lee Woo-seok to earn a military exemption, or in his case an immediate discharge.

Sadly it wasn’t to be. Lee had to face world No. 1 Kim Woo-jin in the final, and Kim wasn’t holding back. The veteran archer defeated Lee 6-4 to win his third individual gold at the Asian Games, and in doing so he guaranteed Lee another 18 months of military service.

“Whether it was the military situation or anything else not related to the competition, I wasn’t thinking about that,” Kim said after the match. “It was tough to beat someone that I know so well after months of training together.”

Other athletes had more success.

In soft tennis, Kim Jin-woong earned his exemption at the very last minute by winning gold in men’s soft tennis singles. The 2015 World Championships winner was expected to enlist in the army on Sept. 18, so the Asian Games really was his very last chance.

Since soft tennis isn’t an official sport at the Olympics, gold at the Asian Games is the only way for an athlete to earn an exemption in the sport.