Genoplan gets ＄13 million in series B funding

Genoplan gets ＄13 million in series B funding 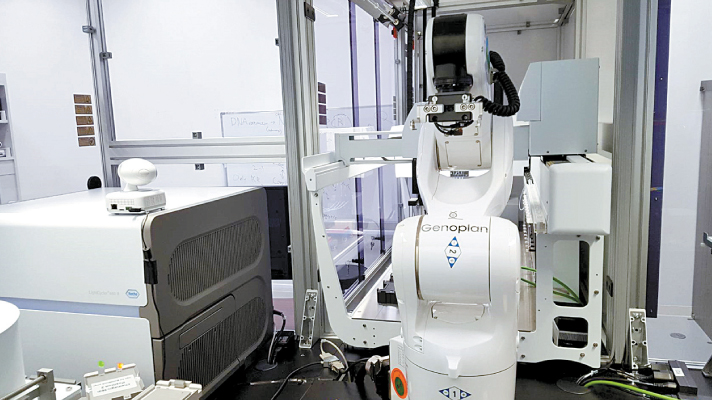 Genoplan’s DNA analysis facility. The start-up recently raised ＄13 million in series B funding from a group of investors. [GENOPLAN]

Genoplan, a DNA analysis start-up, has raised ＄13 million in series B funding from a group of investors led by GC Holdings, a Korean pharmaceutical, the companies announced on Tuesday.

With the new funds, Genoplan has raised over 20 billion won (＄18 million) in accumulated funding since it initially attracted investment from SoftBank Ventures Korea and Samsung Venture Investment.

“We picked Genoplan as the first investment destination after seeing that it was quick to understand the needs of the market to succeed in dominating it before its competitors did,” said Lee Seung-ho, CEO of Daili Partners, “and the company will likely continue expanding further,”

With the series B funds, Genoplan, which has posted over a 300 percent annual growth in revenue since 2016, plans to enhance the predictability of customers’ genetic development using artificial intelligence and to provide customized services.

“We will improve the level of accuracy in the analysis algorithm so that the genetic information we provide can be become more useful in transforming individuals’ lives,” said Kang Byung-kyu, founder and CEO of Genoplan.

The fund will also be used to expand Genoplan’s already existing operation in Japan, a market that the company considers more promising than Korea. After opening a research center in Fukuoka, Genoplan recently launched a sales office in the Roppongi neighborhood of Tokyo and scouted a former chief executive of a Japanese investment management firm.

In July, Genoplan was one of nine start-ups that SoftBank World 2018, an annual corporate event, invited to have CEO Masayoshi Son introduce its technologies on stage.

There are too many restrictions in Korea for Genoplan to expand its presence here, said Hong Aram, the company’s chief business officer and spokesman. Korean health authorities led by the Ministry of Health and Welfare have approved only 12 types of genetic information that Genoplan can offer to its customers, even though the company has the ability to “analyze nearly almost genetic information,” Hong said.

Genoplan, established in April 2014 by Kang, a former gene researcher, is one of a handful of DNA start-ups in the world. It developed a testing kit that anyone can buy for 99,000 won (＄88.63) to analyze individuals’ genetic data. It is available for purchase in Korea and Japan.

Customers mail a container with a bit of their saliva to the company, and in 10 days, they receive an electronic report - in Korean and Japanese - containing information about their body mass, odds of developing obesity, amount of neutral fat, blood sugar, blood pressure, ability to absorb certain nutrition, how aged the test taker’s skin is as well as which nutrients, such as vitamin C, D and calcium, that they need.

The report scores each data point on a scale of 100 and proposes different diets and exercises that match an individual’s genetic features.