Branding experts first had to brand themselves : Now they have blue-chip customers and even helped make the BTS phenomenon take off

Branding experts first had to brand themselves : Now they have blue-chip customers and even helped make the BTS phenomenon take off 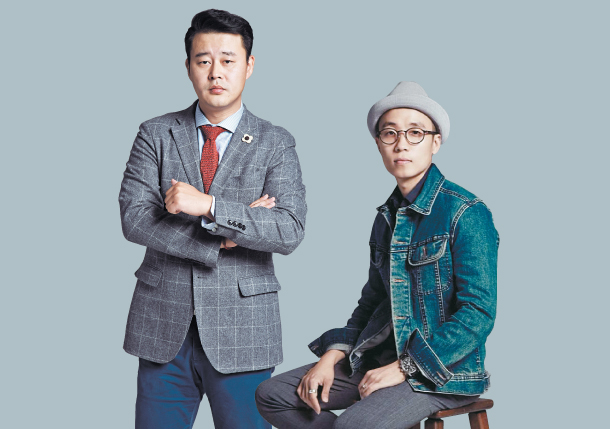 
The whole idea of branding is enigmatic to the layman, largely because it entails so many activities from different fields. From designing a package for a product or a logo for a company, to making slogans and planning the launch of a new brand, branding takes place on so many levels of a business. And yet the end result is a clear unified image that can be understood by customers.

As important as branding is these days, many Korean companies are behind the curve and wouldn’t think of hiring a dedicated company to do it for them. Byun Sa-bum and Shin Myung-sup took a gamble on the business in 2010, when the two founded Plus X along with three other people with similar interests. In the eight years since, Plus X has become Korea’s leading branding company, which designers from various industries turn to for inspiration.

Byun and Shin met at Naver in 2006. They were working on different teams at the company, both design-related. When they were brought together on certain projects, they realized Korea could use an integrated design company.

“Back then, there were a lot of design companies, but they didn’t provide you with a design strategy, a total design strategy that stretches over all the other fields,” said Shin in an interview with the Korea JoongAng Daily. “So you had companies specializing in marketing, videos, brand image or user interface, but you didn’t have a company that did all of that. In the early stages, we had to convince potential customers that they did indeed need such a one-stop solution.”

Left: The storytelling for BTS revolves around doors, an image used on albums. Right: Plus X has expanded globally, such as with NetEase’s e-commerce site Kaola. [PLUS X]

Byun and Shin sat down for an interview with the Korea JoongAng Daily prior to a seminar they will be giving on Sept. 14 at the Dongdaemun Design Plaza, central Seoul, for the Herald Design Forum. Following are edited excerpts. 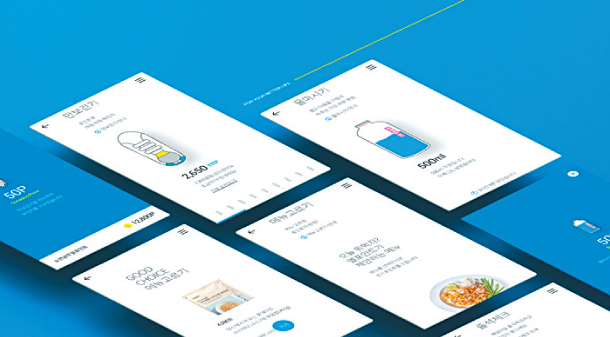 Plus X recently finished a project with L. Point, by Lotte. [PLUS X]

Q. Branding seems to be hot these days. What exactly is branding?

A. Shin: It’s like when you’re describing a friend. If you get asked to describe a certain friend, you come up with words like challenging, persevering, friendly and diligent. This is the brand image we built for [K-pop boy band] BTS, and it’s precisely what the group is known for nowadays. Basically, it’s setting a direction for a certain brand - in this case a certain group of people - for how they are going to proceed in the future. With BTS, we came up with “Beyond The Scene,” with the image of doors. So when they step forward into the future and open the doors [like the group’s logo], their fans (ARMY) are waiting on the other side.

You worked in a set system inside a large company, and then you founded a small company of your own. What were some difficulties that came with that?

Shin: It took us a lot of time to form the market for branding. For instance, if we got a small project within a certain field of design and we told our clients that we can do more than just that, they would say, “This is really good, but it’s not our call to make.”

Byun: We had to explain in detail the things we could do, and convince them we can give them something from A to Z. So at first, it was really about us trying to survive in the new environment. There were hardships, like financial and managerial issues, but we still held hopes for ourselves that we would do it right. It took time.

How does the branding process begin?

Byun: It’s different for each industry, and different for each company. But it all begins with defining what the product, or the service, is trying to sell. What is it for, and how do we want the customers to perceive it? What mediums are we going to use to get that message across? What can be done for the adverts, the offline stores, the social media account or the printed images on the packages? These are the questions that we ask, and the questioning process takes place on all levels and from all perspectives. But at the end of the day, what we’re trying to create is a single voice for the brand to speak for itself.

You’ve done projects for brands of all kinds - from regular companies, to entertainment agencies and even a K-pop group. Is anything different for each brand?

Shin: We take a similar approach, but the outcome is different. With regular companies, an important keyword is consistency. You want to get across the same image from the start until the end, even if changes are made in little bits and pieces. On the other hand with an idol, you must change with every new track or album, and you need a new concept every day. Each industry has its distinct characteristics and we create different strategies with every new project. But at the end, it’s about making an image the identity of the brand.

Branding is becoming increasingly important. What changes do you think are needed for Korea to catch up?

Byun: The working conditions for designers are really hardcore in Korea, mostly because other businesses don’t hold the value of design very high. They say that they think design and branding is important, but they’re not willing to pay the price we ask - because they don’t think it’s actually all that valuable. Korea has a competitive edge, but we can’t do all we could because we don’t get paid to.

What do you see in the future?

Byun: Branding is all about connecting the dots. There are a myriad of different fields for design, but what we do is connect all of them from the beginning to the end within one single process. Branding is, simply said, putting everything together.