Mobile carriers go all out to bag young customers

Mobile carriers go all out to bag young customers 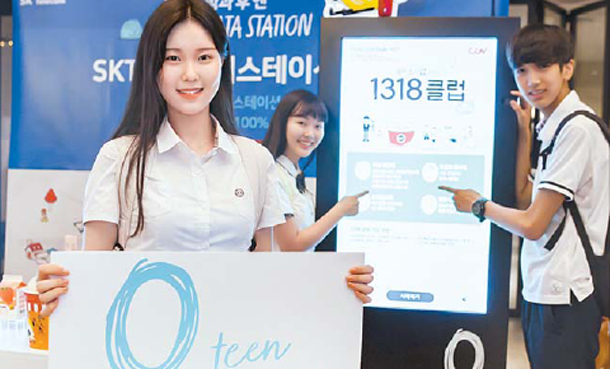 Students promote a data station kiosk installed by SK Telecom to give away extra data for teenagers at a CGV theater in Yongsan, central Seoul, on Monday. The mobile carrier plans to install over 300 data stations nationwide by November. [SK TELECOM]

Mobile carriers are striving to capture the hearts and minds of teenagers and young adults who are heavy data users with the potential to grow into loyal subscribers in the future.

Korea’s largest mobile carrier SK Telecom rolled out a range of benefits for young customers on Tuesday, about a month after it released a series of mobile plans dedicated to customers younger than 25 years old dubbed the “0 Plan.” Zero in Korean is pronounced “young.”

One of the newly introduced initiatives is a promotional contest. The carrier will select 100 people in their 20s and send them off on a vacation of their choice. The competition acknowledges that many young people are unable to go on the once-in-a-lifetime trips that they have always dreamed of because they are too busy finding a job and beginning their careers.

Applicants will need to present their unique plan for the trip to have a chance of winning. SK Telecom will cover flight tickets, transportation fees, accommodation and more.

“We came up with this program for people in their 20s who hope to find out who they really are,” a spokesperson from SK Telecom said. “This is more of a social contribution project for SK, and so it is open to those who do not subscribe to our phone plans.”

The company has a plan for university campuses as well, considering that the majority of young adults in Korea are university students. Subscribers to the carrier’s “0 Campus” program will get a gigabyte of extra data plus 100 gigabytes of storage at SK Telecom’s cloud service Cloud Berry when they are on their university campus.

When more students gather, benefits increase. If over 20 percent of enrolled students at a certain campus subscribe to SK Telecom’s “0 Campus” program, they will be granted two gigabytes of data and 200 gigabytes of cloud storage space at Cloud Berry.

The mobile carrier also released a debit card dubbed “0 Card” that offers up to 15 percent off at a shop that the cardholder registers as their favorite. While previous membership discount benefits were mostly linked with large franchises, the mobile carrier said it considered feedback that young adults these days are more attracted to small and unique shops.

For teens, often unable to pay extra for more data, SK Telecom is offering data-free access to 15 of the most popular mobile apps in that age group such as the Modoo Marble game app from Netmarble Games and Snow camera app, the mobile carrier said. Content providers are paying for the data in partnership with SK Telecom.

A data SOS program is in place for teens that suffer from data shortage at the end of every month. If three SK Telecom using teens get together after the 20th of each month, they can jointly request an extra gigabyte of data each for free. The data will expire at the end of the day and teenagers can use the function twice a month.

The mobile carrier is also setting up data charging stations at CGV movie theaters, CU convenience stores and Etude cosmetics stores. Teens can get 100 megabytes of data per day, five times a month, through the data charging kiosks. SK Telecom plans to install 300 by November and gradually expand the number.

“The large benefits could result in short-term losses in terms of profits, but in the long-term, we could earn customer trust,” said Son In-hyuk, segment project leader at SK Telecom.

SK Telecom is not the only carrier in the game. KT released a new phone plan dedicated to people aged under 24 on Monday, dubbed “Y24 ON.” The new plan offers more data than similarly priced packages. For instance, while three gigabytes of data is typically offered at 49,000 won ($44) a month, the Y24 branded phone plan offers six gigabytes of data at the same price.

KT offers extra benefits for young adults and teenagers. The carrier is launching “Y triangular gimbap” in collaboration with GS25 convenience store chain. KT customers can buy the gimbap with a 10 percent discount with their membership points from Sept. 14 until Oct. 11.