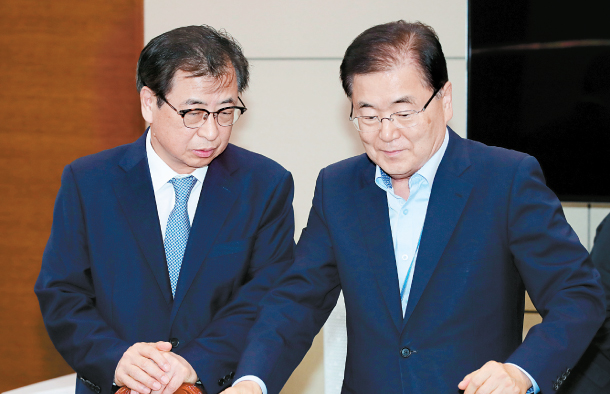 To break the impasse between North Korea and the United States over denuclearization, the Moon Jae-in administration is proposing a framework in which a formal end to the 1950-53 Korean War is followed by concrete measures by Pyongyang to wind down its nuclear arsenal.

Moon is sending security adviser Chung Eui-yong to Pyongyang today as a special envoy, and he is expected to urge North Korea to first make a verbal promise to come up with specific denuclearization steps, including a timetable, government sources said.

“I understand that Washington has accepted positively Seoul’s proposal that three or four countries participate in issuing an end-of-war declaration if North Korean leader Kim Jong-un makes a verbal pledge that he will take early denuclearization steps with a specific timetable,” said a diplomatic source.

In the last few weeks, Pyongyang has made it clear that it wants Washington to declare a formal end to the Korean War, which ended in an armistice, not a peace treaty, leaving the two Koreas technically at war. Then it will give a detailed accounting of its nuclear program.

Formally ending the war that came to an armistice 65 years ago would be a starting point for Pyongyang towards the normalization of diplomatic ties with Washington, which it sees as vital to its regime security.

It is expected that Chung, who will lead a five-member delegation to the North Korean capital on a day-long trip, will be discussing this proposal with North Korean officials.

“The government sees an end-of-war declaration as a critical step in the pursuit of securing peace through denuclearization of the Korean Peninsula,” said Chung at a press briefing at the Blue House Tuesday.

“In light of that, we agreed with the North at the April 27 inter-Korean summit to declare a formal end to the war by the end of this year as it marks the 65th anniversary of the armistice.”

North Korean leader Kim’s verbal promise to come up with specific denuclearization steps, including a timetable, is supposed to be issued before his summit with Moon in Pyongyang in mid-September.

Then a meeting could be held involving the two Koreas and the United States, or a four-way meeting that also includes China, to declare an end to the Korean War. After such a declaration is made, the North would have to come through with a detailed description of its nuclear weapons program.

If the Donald Trump administration accepts Seoul’s proposal, it would be a softening of its insistence that Pyongyang take concrete denuclearization steps before an end-of-war declaration.

While Trump has lauded the North’s suspension of nuclear and missile tests since last November and dismantlement of its Punggye-ri nuclear testing site as well as the return of remains of U.S. soldiers killed in the Korean War, his administration has demanded it take more concrete denuclearization steps, such as declaring a complete list of its nuclear stockpiles and related facilities.

The North says that after it demolished the Punggye-ri nuclear site and dismantled its Sohae missile engine testing site, it is now the United States’ turn to offer something in exchange, specifically an end-of-war declaration.

The North made that point clear in a letter from Kim Yong-chol, the vice chairman of the North’s Workers’ Party, to Secretary of State Mike Pompeo. “Kim’s letter described Pyongyang’s deep discontentment that the United States has done nothing in spite of the fact that it shut down the Punggye-ri nuclear test site and returned the remains of U.S. soldiers,” said the source.

The impasse prompted Trump to cancel a planned visit by Pompeo last month.

If Kim agrees to Seoul’s proposal and issues a verbal promise for early denuclearization steps and Trump accepts that, the Blue House will have succeeded in bringing Kim and Trump closer to common ground.

In a sign of how seriously the Blue House is taking its role as mediator between the two nations, Im Jong-seok, Moon’s chief of staff, said in a Facebook post Monday that the special delegation will go to North Korea “with an earnest wish to create a new situation and condition of our own making” to seek a breakthrough in gridlocked nuclear talks.

“In the serious nature of diplomacy, it is virtually impossible to seek a historic shift without the United States’ strategic patience or consent. That is why we, the Moon government, are having an unprecedented level of cooperation and dialogue with the United States,” the chief of staff wrote.

At the same time, he wrote that the past year had taught the Blue House that it will all come down to the will and ability of the South Korean government to change the course of the future in respect to North Korea.

Special envoy Chung is expected to fly to Pyongyang at around 7:30 a.m. today from Seoul Air Base in Seongnam, Gyeonggi.

It is the same delegation that was sent to Pyongyang on March 5 and met with leader Kim at the Workers’ Party headquarters in Pyongyang.

Chung told reporters at the briefing whether his delegation meets with Kim would be determined once they arrive in Pyongyang today.

If he does, Chung will deliver Moon’s letter to the North’s leader.

If Chung’s delegation returns to Seoul later in the day without meeting Kim, it could indicate Pyongyang’s unchanged stance that it will not take additional denuclearization steps unless Washington moves to end the Korean War.

If the North refuses Moon’s purported proposal, it might even derail the third Moon-Kim summit scheduled to take place this month in Pyongyang. The Blue House believes not much can be gotten from an inter-Korean summit without progress in the North-U.S. denuclearization talks.