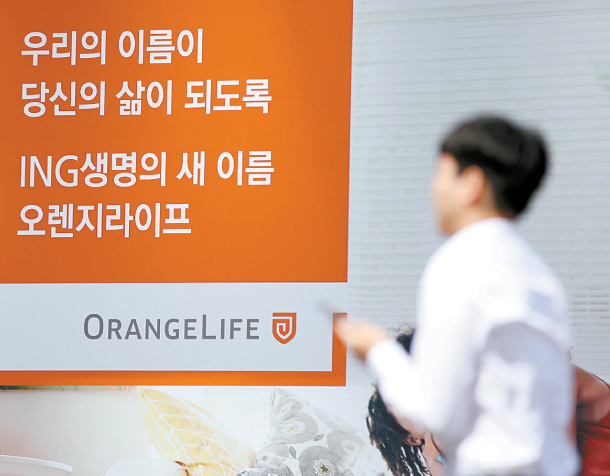 A banner at Orange Life Insurance’s headquarters in central Seoul on Wednesday. [YONHAP] 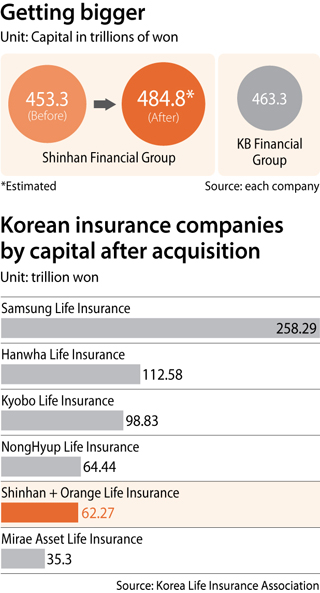 The group signed a sales agreement with MBK Partners, a Seoul-based private equity firm, to acquire the insurance company’s controlling stake of 59.15 percent after its board of directors gave the green light earlier Wednesday morning.

Shinhan said it will buy a total of 48.5 million shares of Orange Life Insurance for 47,400 won per share. MBK bought a 100 percent stake in Orange from ING group in 2015 and sold off some shares later.

With the acquisition, Shinhan will exceed archrival KB Financial Group in terms of capital. The purchase will push up Shinhan’s capital from 453.3 trillion won to 484.4 trillion won.

KB’s total capital stood at 463.3 trillion won as of June, according to an electronic disclosure.

The purchase is in line with Chairman Cho Yong-byoung’s desire to bolster non-banking businesses because more than half of the group’s revenues currently come from its flagship banking unit, Shinhan Bank.

Good potential for the life insurance industry was another key factor, according to one of Shinhan’s directors.

“The life insurance industry is expected to maintain stable growth when we consider the country’s aging demographics and market maturity in the financial sector,” the director said, “The acquisition will help keep a balance in our business portfolio and diffuse concentration on banking and card segments by strengthening life insurance.”

Shinhan’s existing life insurance business is ranked eighth in the industry in terms of capital.

When combined with Orange Life, Shinhan Life Insurance will jump to fifth place with an estimated 62.27 trillion won in capital.

But no decision has been made on whether Orange Life and Shinhan Life Insurance will be merged or operated separately.

“Nothing has been decided yet,” said a spokesperson for Shinhan Financial Group.

The price stood in the way of a deal since the two companies started negotiations over the acquisition nine months ago. Chairman Cho told reporters last month that Shinhan was in the final stage of purchasing the insurer, but some details needed to be ironed out.

Analysts said Cho managed to persuade MBK to set the price at about 2.3 trillion won.

“The confirmed price set between 2.2 trillion won and 2.3 trillion won is lower than the initially discussed price range of 2.5-3 trillion won,” said Won Jae-woong, an analyst at NH Investment & Securities.

Moody’s, a global ratings agency, predicted that the purchase would not put a serious financial strain on the group or key affiliates.