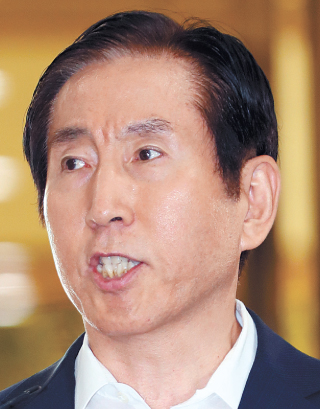 Cho, 63, arrived at the central police headquarters in western Seoul at around 9 a.m., a day after police formally summoned him. He served as the police chief from 2010-12.

“I’ve always stood by political neutrality and never told (anyone) to interfere in politics,” he told reporters. “I told my officers to actively engage in defending against criticism that was based on falsehoods.”

Cho is accused of abusing his power and instructing the agency to launch online maneuvers aimed at swaying public opinion in favor of the Lee government and his policies. He denied the allegations, saying he gave instructions via official means and therefore they cannot be seen as secret maneuvers. The police agency’s cyber command allegedly had its own officers write more than 40,000 comments supporting the government. The cyber team is also accused of ferreting out those who posted any negative comments about the Lee government.

Some ex-ranking police officers under Cho’s leadership have been investigated, although a court has denied a police request for arrest warrants for them on charges of abuse of power and violation of telecommunications law.