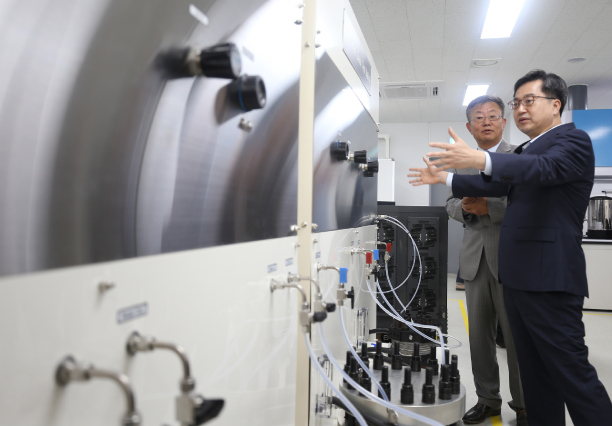 The Korean government will support the technological development of hydrogen energy, according to the country’s top economic policymaker.

In a meeting with local companies at Elchemtech’s headquarters in Gangseo District, southwestern Seoul, on Friday, Kim Dong-yeon, the finance minister and deputy prime minister for the economy, said the government will take the lead and provide the necessary support for companies to develop technology in the field, including the production, storage and transportation of hydrogen.

Elchemtech is a medium-sized chemical company that focuses on disinfectants and hydrogen energy.

Kim said in the meeting that the Korean economy is at a juncture where it needs a structural change, moving away from relying heavily on a handful of industries such as semiconductors. He added that industries that once led the growth of the economy such as steel, shipbuilding and automobile are losing ground in the global market.

“The survival of our economy depends on innovative growth,” Kim said, adding that realizing the “hydrogen economy” would enable the country to move forward.

This is the ninth time that Kim has met with private companies since taking office. Kim has previously held meetings with firms such as LG, SK and Samsung.

The companies at the meeting emphasized the importance of infrastructure, such as hydrogen energy stations, when hydrogen becomes a major energy source in the future.

At the moment, there are only two hydrogen energy stations in Seoul.

Kim promised to take into account the industry players’ needs when the government passes legislation related to the hydrogen energy.

At the moment, the so-called hydrogen economy act is awaiting approval at the National Assembly.

The proposal includes the designation of a special industrial zone for hydrogen energy. Kim, however, expressed his concern that the law could send a message that the government is trying to regulate the industry.

“When we enact the law, we will listen to the voice of industry players so that we do not create another regulation [that could hamper their business],” Kim said.