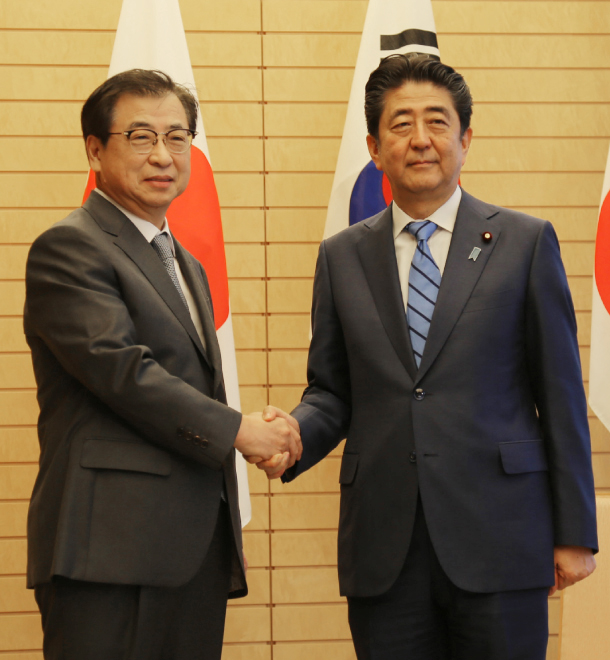 Japanese Prime Minister Shinzo Abe said he would like to meet with North Korean leader Kim Jong-un in person as he was briefed on Monday by Suh Hoon, South Korea’s spy chief, on a South Korean delegation’s recent trip to Pyongyang.

Suh, the director of South Korea’s National Intelligence Service, met Abe in the morning in Tokyo to discuss the outcomes of a South Korean delegation’s meeting with Kim last Wednesday. They discussed how South Korea and Japan could cooperate to bring about “complete denuclearization and permanent peace on the Korean Peninsula,” the Blue House said.

The South Korean intelligence chief was one of four people sent by President Moon Jae-in to accompany his special envoy, Chung Eui-yong, the Blue House’s national security adviser, to meet with Kim and deliver a letter on Moon’s behalf.

Abe thanked Suh for visiting Japan so soon after the trip to Pyongyang to brief him on the outcomes of the visit.

“This is a good opportunity to convey to the world that Korea-Japan relations have become that much closer since the onset of the Moon Jae-in administration,” Abe said.

Suh replied that Moon believes Abe’s role is “more important than ever regarding the issue of denuclearization and peace on the Korean Peninsula,” adding that “communication and cooperation between South Korea and Japan should be strengthened.” The president, he said, “recognized the importance of close communication with Japan for the peace and prosperity of the Korean Peninsula.”

Moon also sent Suh to Tokyo shortly after his first summit with Kim in April.

After his meeting with Abe, Suh told reporters, “Prime Minister Abe said that Japan’s position has been conveyed [to North Korea] through President Trump and President Moon Jae-in, and expressed his strong determination now to meet with Chairman Kim in person and hold talks with him. Prime Minister Abe said it would be desirable for North-Japan relations to advance harmoniously alongside inter-Korean and North-U.S. dialogue to resolve various issues.”

The South Korean government’s position is that “North-Japan relations should be revived and improved upon,” Suh added. One longstanding issue has been the North’s abduction of Japanese nationals during the 1970s and ’80s. When asked if North-Japan talks could be expected soon, Suh replied, “Japan and North Korea will determine the timing and method.”

Abe expressed interest in preparations for the inter-Korean summit set to take place next week and how Kim’s willingness to denuclearize will translate to implementation, Suh said.

In a similar diplomatic gesture, Chung, Moon’s special envoy, traveled to Beijing on Saturday and briefed Yang Jiechi, a member of the Chinese Communist Party’s Politburo and director of the Office of the Central Commission for Foreign Affairs.