Moon will fly to Pyongyang for 3rd summit

Moon will fly to Pyongyang for 3rd summit 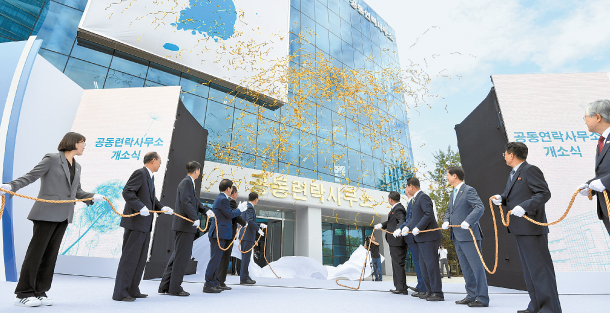 Officials from South and North Korea unveil a liaison office in the Kaesong Industrial Complex on Friday. The liaison office will serve as a round-the-clock communication center between the two Koreas. [YONHAP]

It will be the first time in 18 years for a president to visit the North Korean capital by plane.

“President Moon will visit Pyongyang by flight via a direct route above the Yellow Sea,” Kwun Hyuk-ki, director of the Blue House’s press center, told reporters.

An advance team to prepare for the Sept.18-20 summit will travel to Pyongyang Sunday by car.

The agreements were reached at a working-level meeting between South and North Korea on Friday held in the border village of Panmunjom to discuss protocol, security and press coverage of the upcoming summit.

The South sent a four-member delegation led by Kim Sang-gyun, the second deputy director of the National Intelligence Service, to the meeting. Kwun was also a participant.

The North also sent a four-member delegation led by Kim Chang-son, an official from the North’s State Affairs Commission. The meeting began at 9 a.m. and lasted five hours without a break, according to Kwun.

“The meeting went smoothly with the shared goal of holding the summit successfully,” Kwun said. He did not reveal who will be in South Korea’s delegation to the summit.

He said the size of the delegation would be slightly larger than the 200 that was previously announced by Im Jong-seok, Moon’s chief of staff, on Monday, but did not provide a specific number. The Sept.18-20 summit will be the third time a South Korean president visited Pyongyang for a summit.

Former South Korean President Kim Dae-jung made a historic crossing into the North for a 2000 summit with then-North Korean leader Kim Jong-il, father of Kim Jong-un, by plane.

President Moon, who was Roh’s chief of staff at the time, stayed behind in Seoul. The last two summits, both of which occurred this year, took place in the border village of Panmunjom. The first took place in a South Korean-controlled building while the second was held on May 26 in North Korean territory. Unlike the April 27 summit, the presidential office kept the May summit a secret until it concluded. It came at a sensitive diplomatic time after U.S. President Donald Trump’s abruptly canceled a scheduled North-U.S. summit days earlier.

That summit, the first North-U.S. summit, was eventually held on June 12 in Singapore.