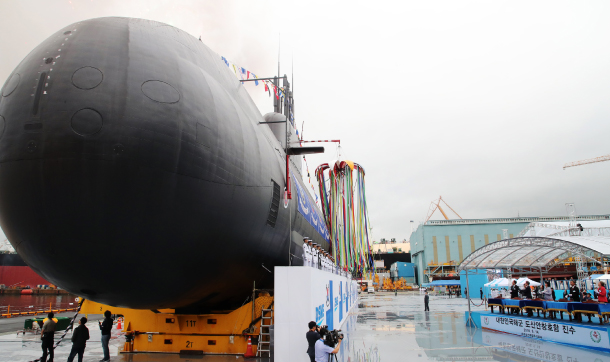 South Korea unveiled a 3,000-ton attack submarine built with indigenous technology and capable of carrying a nuclear-powered engine at a ceremony on Friday, the first step in the country’s plans to develop a blue-water navy that can operate globally in the next few decades.

A ceremony to launch the Dosan Ahn Chang-ho, named after the independence activist and key member of Korea’s provisional government in Shanghai, took place on Friday at the shipyard of Daewoo Shipbuilding and Marine Engineering in Geoje, South Gyeongsang, with South Korean President Moon Jae-in in attendance.

The submarine is the first of nine 3,000-ton Chang Bogo-class attack submarines that are the largest ever to be built for the South Korean Navy.

Capable of carrying around 50 crew members at an underwater speed of 20 knots (23 miles per hour), the vessel is 83.3 meters (273.3 feet) long and 9.6 meters wide, with 76 percent of its component parts built domestically. The vessel is set to undergo two years of operational testing before it is delivered to the Navy for use by the end of 2020.

This newest addition to South Korea’s submarine fleet is most notably equipped with six vertical launching tubes, a modern type of system used to hold and fire missiles superior to standard torpedo launchers in both performance and flexibility. They can deploy a wider array of weapons including ballistic missiles with a range of over 500 kilometers (310 miles).

If augmented, this latest addition to South Korea’s fleet could be outfitted with a nuclear-powered engine and serve as strategic deterrents to North Korea’s own growing naval inventory. The Dosan Ahn Chang-ho is only part of the first batch of Chang Bogo-class vessels, and two augmented batches with displacements of 3,600 and 4,000 tons are being planned, possibly as nuclear submarines.

Moon attended the ceremony in an effort to reinforce his government’s plans to strengthen the country’s naval capacity, even in the middle preparations for his third summit with North Korean leader Kim Jong-un set to take place in Pyongyang from Tuesday to Thursday.

“We have embarked on the great journey toward denuclearization and construction of a permanent peace regime on the Korean Peninsula,” Moon said at the ceremony. “But peace is never given freely, and we must build it and defend it ourselves.”

Analysts say Moon’s attendance suggests that he will follow in the footsteps of his liberal predecessor, Roh Moo-hyun, in developing a blue-water navy capable of conducting ocean-based naval operations independently from United States.

Such plans had been scrapped after the conservative Lee Myung-bak succeeded Roh as president. He preferred to focus on deterrence against North Korea’s asymmetric warfare capacity in the aftermath of the Cheonan warship sinking and shelling of Yeonpyeong Island by the North in 2010.

But a growing naval arms race with neighboring states like China and Japan, and a successful ballistic missile launch from a North Korean submarine in 2016, renewed calls from conservative lawmakers for a nuclear submarine not unlike Roh’s plans.

North Korea only has one active submarine capable of launching a ballistic missile, but U.S. military intelligence found last year that it was working on an augmented version.