The importance of English

The importance of English 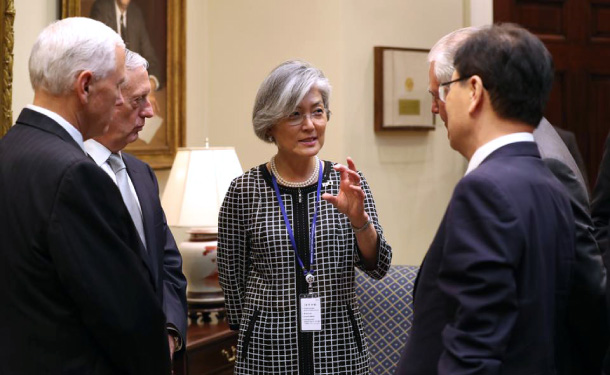 
In Korea, English language skills are a key source of stress. Former Foreign Minister Kim Sung-hwan told me that when he was the North American section chief, “Those who didn’t have English speaking skills were stressed after joining the ministry and practiced in the field. It was inevitable that their pronunciation was not good. But what was important were their contents and rhetoric.” Within the Foreign Ministry, there are rumors that an official did not want anyone accompanying him when receiving a foreign guest because he didn’t want others to know about his English skills. But this is in the past.

Foreign Minister Kang Kyung-hwa, who worked as an interpreter for President Kim Dae-jung, addressed the often lacking English skills of Korean diplomats. As their limited skills do not suit the national status and strength of Korea, the Foreign Ministry is revising its language assessment and training system. Many feel that it is an appropriate point to address, as the ministry is dealing with national interests. But some say that the minister is stressing English because she is known for her fluent English, and point out that the section on ending the war in the Panmunjom Declaration submitted to the United Nations was translated to fit the English translation by North Korea.

Proficient language skills enhance the productivity of diplomacy, especially for the heads of overseas delegations at the frontlines of diplomacy with resident countries. The special mission chiefs appointed by the president are in key countries, including the so-called “big four” ambassadors to the United States, China, Japan and Russia. Some of them have trouble communicating in English, not to mention the local language. Even powerful countries whose diplomats are influential don’t send someone without language skills to key countries. When Chinese foreign minister Wang Yi was China’s Ambassador to Japan, he used his native-level Japanese to establish relationships with Japanese elites, including Japanese monarch Akihito and his wife.

Those at the core of the administration are treated well even if they have limited English skills, but those with neither influence nor language skills will find it hard to fulfill their duty. When Kang addressed Korean diplomats’ subpar English skill, many diplomats wondered why the English and second foreign language tests were not included when the special mission chiefs were selected.