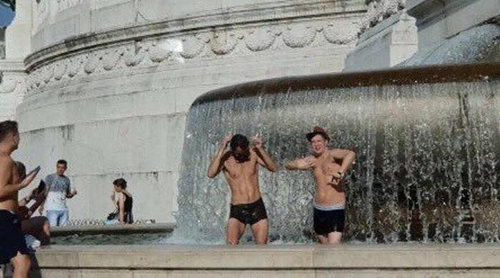 Trevi Fountain, which was completed in 1762, is visited by millions of tourists every year. It became a famous landmark internationally through movies like Roman Holiday and La Dolce Vita. When I visited Trevi Fountain two years ago, it really was impressive. It was bigger than I thought and the area was packed with tourists. Recently, two tourists fought over the photo spot. The myth that throwing a coin over ones shoulder will ensure another visit to Rome in the future leads to competition to find the best vantage point.

I thought about Trevi Fountain because of the truth and myth about trickle-down effects and fountain effects. Fountain effect is a theory that spending increases when income and welfare assistance for low-income and mid-income classes is reinforced. Trickle-down effect is a model that money spent by the rich flows to the lower classes and growth of conglomerates also help their partners. Both are valid, but it is hard to say that one is right and the other is wrong.

However, Hong Jang-pyo, chairman of the special committee on income-led growth, said that the economic growth paradigm relying on the export-focused large corporations has reached its limit. Instead, he believes that the fountain effect should be reinforced through income-led growth with policies like minimum wage increases. In fact, the industries involving large corporations — such as semiconductor production — do not have a major impact on job creation.

But the reality is the opposite. Chaebol still lead investment and employment. Eight major companies, including LG, had an investment relay totaling 400 trillion won ($355.9 billion). The jobs created from the investments and impact on the partners will number more than 200,000. It shows the trickle-down effect on exports is still valid. A surge of unemployed workers from closed Hyundai Heavy Industry and GM Korea’s Gunsan plant also proves the trickle-down effect. If water doesn’t flow down, the fountain itself would dry up.

The Blue House bringing the heads of four major conglomerates to the inter-Korean summit in Pyongyang can also be explained with the trickle-down effect. If big companies take the lead, the impact of inter-Korean economic cooperation will grow.
The Trevi Fountain is a fountain, but water spurts out from the top. Water has to flow from high to low.