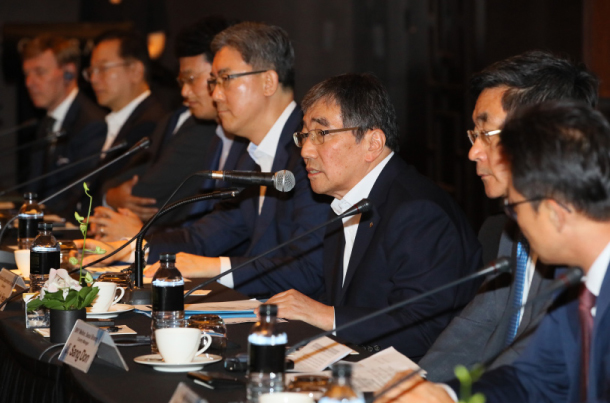 The head of the country’s financial watchdog called for tighter internal control and risk management from chiefs of foreign financial companies operating in Korea on Wednesday, following a series of accidents involving trading practice.

Yoon has been warning against expensive mistakes by financial companies after local brokerages such as Samsung Securities and Eugene Investment & Securities suffered from so-called fat-finger trading errors.

The heads of 24 multinational financial companies including the Bank of America, Bank of New York Mellon and Mizuho Bank participated in a meeting to discuss any problems with government regulations in running businesses.

The gathering came as the number of foreign companies in Korea has remained flat for the past three years.

Yoon put a plug in for the Korean market, saying that growing demand for pension funds from aging populations will offer new opportunities for foreign financial companies.

He also pledged to ease unnecessary regulations for foreign companies, although he didn’t specify which regulation could be lifted.

In time with the inter Korea summit, Yoon said that the companies could benefit from a series of potential economic projects between South and North Korea.

“Financial companies could enter North Korea and the Financial Supervisory Service and Financial Services Commission should play a role,” Yoon said after the meeting.

KDB was the only financial institution whose head was included in the business delegation accompanying President Moon Jae-in to Pyongyang.