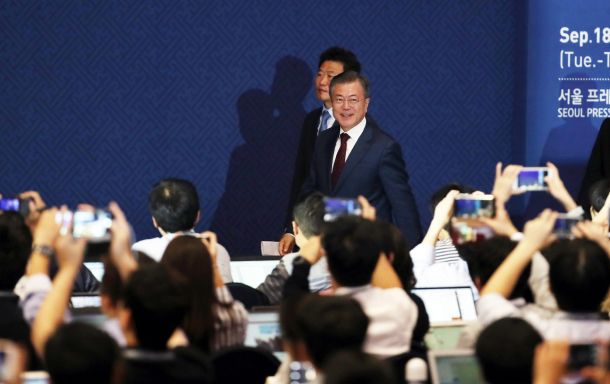 President Moon Jae-in, returning from his three-day trip to Pyongyang, walks to the podium in the main press center at the Dongdaemun Design Plaza in eastern Seoul on Thursday to give his briefing to journalists from home and abroad about the outcome of his third summit meeting with North Korean leader Kim Jong-un. [YONHAP]

President Moon Jae-in said Thursday he had reaffirmed North Korean leader Kim Jong-un’s commitment to denuclearization in the time spent with him in Pyongyang, noting that Kim had told him he hoped to focus on economic growth now.

Speaking to reporters at the inter-Korean summit press center at the Dongdaemun Design Plaza upon his return home, the president said, “Chairman Kim expressed many times his determination for denuclearization.”

Moon said the North Korean leader conveyed his wish to finish the denuclearization process so that he could focus on growing the North’s economy.

Moon said the Pyongyang Declaration was significant in that it will keep the North from carrying out any further nuclear or ballistic missile tests.

The next step, he continued, would be for the regime to completely dismantle its nuclear facilities and ballistic missiles. For that to happen, the United States will have to reciprocate by ending its anti-North Korea policy and guarantee the regime’s safety, Moon continued.

Moon said Kim’s promise to dismantle the Tongchang-ri missile engine testing site and a launch pad there in the presence of international experts was a clear indication of Kim’s sincerity.

“To speed up the denuclearization process, Kim expressed his hope for a visit by U.S. Secretary of State Mike Pompeo and a second summit meeting with U.S. President Trump,” Moon said.

He stressed the significance of Kim’s dismantlement of the Tongchang-ri missile test site in the presence of international experts for verification, saying, “If dismantled, it means the North will no longer be able to launch additional missiles or further advance its missile technology. Kim also declared he would permanently close down the Yongbyon nuclear facility, the symbol of the North’s nuclear program, if there are corresponding actions [from the U.S.].”

On more concrete denuclearization steps demanded of Pyongyang by Washington, such as drawing up an inventory of its nuclear stockpiles and related facilities, Moon said such additional measures should be discussed between the North and the U.S.

“The North’s specific denuclearization measures and corresponding actions [by the U.S.] are issues that need to be discussed between the two,” he said.

Moon said he had talked with Kim on a wide range of issues involving denuclearization and he would describe those points in a meeting with Trump next week but declined to elaborate on what those points were, saying it was inappropriate for him to share them at this point.

“It is such a big departure from the past that North Korea now discusses in detail denuclearization measures with us,” he said.

Looking back on what he had achieved in his time in the North Korean capital, Moon said “conditions have now been established to resume the North-U.S. talks.”

On agreements he and Kim made that weren’t included in the Pyongyang Declaration for reasons unexplained, Moon said both Koreas agreed to boost cooperation among regional governments and have the North attend a cultural festival planned for December in South Korea.

The Blue House chief said he also asked Kim to lift the North’s decision to freeze all South Korean assets in the Mount Kumgang tour zone, to which Kim agreed.