Not working is not an option for Korea’s seniors

Not working is not an option for Korea’s seniors 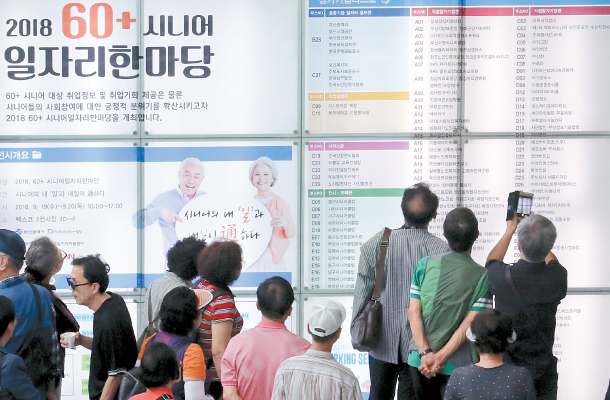 Seniors look for jobs during a job fair for people that are aged 60 or older at Bexco in Busan on Sept. 19. More than 110 companies participated in the fair. They were looking to fill over 1,200 positions. [SONG BONG-GEUN]

Lee Young-gap recently landed a job as a security guard at a building in downtown Seoul.

For 30 years, Lee worked in shipbuilding. After he retired, he spent the next 20 years running a restaurant, which closed earlier this year.

Although he has worked for 50 years, Lee never managed to save much. His children struggle to make a living so he can’t really rely on them.

Lee has no other choice but to keep working.

Korea has one of the highest employment rates in the world for senior citizens. That’s not as positive as it sounds. Many work because, like Lee, they must.

But many of the jobs taken by senior citizens are temporary positions or day-to-day hires, which helps them to get by but not to escape their dire financial situations.

According to a recent report by Statistics Korea, the employment rate of Koreans between the ages of 70 and 74 last year was 33.1 percent. That’s more than double the rate of Estonia, which has the highest employment rate for this age group among the 28 EU member countries. The second highest among the EU countries was Romania with 13.5 and Portugal with 11.7 percent.

Korea outranked the average of OECD member countries. The OECD average employment rate for people between the ages of 70 and 74 was 15.2 percent.

Korea’s employment rate for people between the ages of 65 and 69 was 45.5 percent. The only country in the OECD that outranks it was Ireland with 52.3 percent.

The statistics agency’s study found that among the seniors 65 years old or older, 61.8 percent said either they or their spouse earn their living expenses, which is 10 percentage points higher than in 2011 when it was just 51.6 percent. Those that live on support from their children or relatives shrunk from 39.2 percent to 25.7 percent during the same period. The remaining 12.5 percent live on government or social organization support.

Dependence on children has shrunk significantly. Among those aged 65 years or older, 72.4 percent live independently, up from 71.8 percent two years ago and up from 68.6 percent in 2011.

As a result, 64.1 percent of people aged between 55 and 79 say they are looking for jobs this year. The biggest reason - 59 percent - is to earn living expenses. That is 4.9 percentage points higher than in 2014.

And the poverty situation facing seniors is only getting worse. As of 2016, the poverty rate among people aged 65 or older was 43.7 percent, which was higher than the 43.4 percent recorded in 2015. This means that four seniors out of 10 are below the poverty line. Among the 28 EU member countries, the highest such poverty rate is Latvia’s 22.9 percent.

“While the employment rate of senior citizens is higher [than other age groups], there are many who still have no work and only 40 percent receives pensions,” said Lee Jae-won, director of the social statistics bureau at Statistics Korea. “Our society has not been properly prepared for the rapid speed at which it is aging and we have a high poverty rate among seniors.”

Experts point out the glaring need for quality jobs for senior. Some 24.4 percent of people aged between 55 and 79 are working in simple labor positions. Seniors with skills in machinery handling accounted for 22.3 percent while those working in services or sales businesses followed with 22.1 percent.

“In facing an aging population, we need to strengthen our social safety net,” said Kang Sung-jin, an economics professor at Korea University.