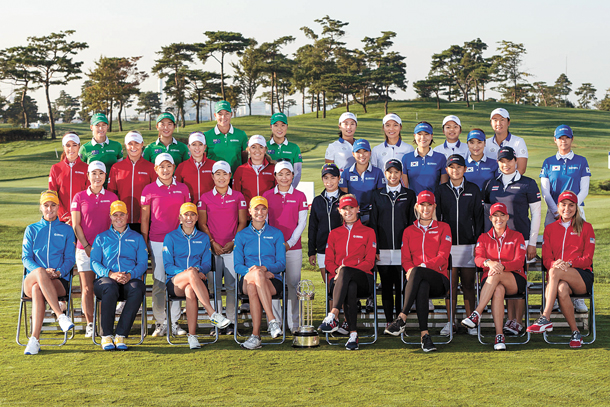 The players competing in the UL International Crown this week pose for a photo at Jack Nicklaus Golf Club Korea in Incheon on Tuesday. [UL INTERNATIONAL CROWN]

Less than a week after the PGA Tour’s Ryder Cup, the LPGA Tour will also host its own international competition. The biennial UL International Crown starts at Jack Nicklaus Golf Club Korea in Incheon today.

The third edition of the UL International Crown, which is being held outside of the United States for the first time, will feature eight teams ? Korea, United States, Japan, England, Australia, Thailand, Sweden and Chinese Taipei. Each team is seeded based on the rankings of their players, and the eight teams are divided into two brackets. In the first three days of the tournament, four-ball matches will be played, and teams will play against the other three teams in their bracket. The rankings will be made based on the points received from the four-ball matches.

Teams will be given two points for a win, a point for a tie and zero for a loss. Based on the points the teams receive for their first three days of four-ball matches, the top five teams will advance to the singles matches on Sunday.

For the second consecutive competition, Korea is entering the tournament as the top seed. The Korean team consists of top ranked Park Sung-hyun, third-ranked Ryu So-yeon, 10th-ranked Kim In-kyung and 27th-ranked Chun In-gee. As all four players have major titles on their resume, Team Korea is the heavy favorite at this year’s edition.

Although Park is the highest ranked golfer in the 32-player field, this will be her first time competing in the tournament.

“I have played for the country before, but this is a much bigger event,” Park said at a press conference on Tuesday. “And that makes me so nervous. I started getting nervous two months ago, and I am still worried about how I am going to play.”

Ryu is the only member on Team Korea to be competing in all three UL International Crown events, and this year, she is entering the tournament feeling better than ever. Last week, Ryu competed in the JLPGA tournament, where she won the Japan Women’s Open Golf Championship.

“The reason I decided to play [in] Japan was to prepare for this tournament, and I normally prefer to play a tournament before major,” Ryu said.

In addition to her victory last week, Ryu has been a solid player based on her performance in the previous two competitions. She has won a total of 12 points for Korea, the most points won by a single player.

The other two members of Team Korea - Kim and Chun - are expected to strengthen the team, as it is their second time competing in the tournament. Kim made it back onto the national team for the first time since 2014, while Chun is making her second straight appearance.

At the inaugural tournament in 2014, Korea was given the second seed and finished third. In 2016, Korea entered the tournament as the top seed, but finished runner-up behind the United States. And this year, Korea once again has the top seed. The team is more determined than ever to finally win the event at home.

Korea will start the first four-ball match against eighth-seeded Chinese Taipei today, before playing against fifth seeded Australia on Friday and fourth-seeded England on Saturday.

“The fact that we were the top seed for the first event and we were picked as most likely to win, there was enormous pressure that we put on ourselves,” Ryu said. “I think perhaps we’ve learned how to deal with that sort of pressure.”

However, it won’t be an easy win for the host country. The United States is set on defending their title, and its team has a great mix of veterans and new faces. Cristie Kerr and Lexi Thompson will be competing for the third time while Michelle Wie and Jessica Korda will be making their debut at the UL International Crown.

“I think all of the pressure is on them this week,” Kerr said. “They’re playing in front of their home crowd. Korean people can put a lot of expectations on their golfers. We’re going to keep it loose and not feel the pressure that they feel this week.”

For Wie, the Crown is her first tournament in two months. Wie hasn’t competed after withdrawing from the first round of the Ricoh Women’s British Open in August due to a wrist injury.

“Making the U.S. team for this event was one of my primary goals this year, because I wanted to play in South Korea,” Wie said. “It is important for me to be playing here in front of my family. It’s going to be fun seeing all the Korean fans and playing before my family.”

In addition to Wie, Australia’s Su Oh and Minjee Lee also have expectations for their play in front of their fans in Korea. Team Australia hopes to redeem themselves after finishing at the bottom of the pack in both competitions.

This year, they are expected to be a more experienced and better team. Seventh-ranked Lee, who competed for Australia as an amateur in 2014, will be playing for the third time and is expected to lead her team as she enters the tournament. Oh will make her second appearance. In addition to the two players, Katherine Kirk also made it back onto the team for the first time since 2014, and Sarah Jane Smith will be making her debut at the tournament.

The first round of the UL International Crown will start at 9:15 a.m., with Team England and Team Australia teeing off first.