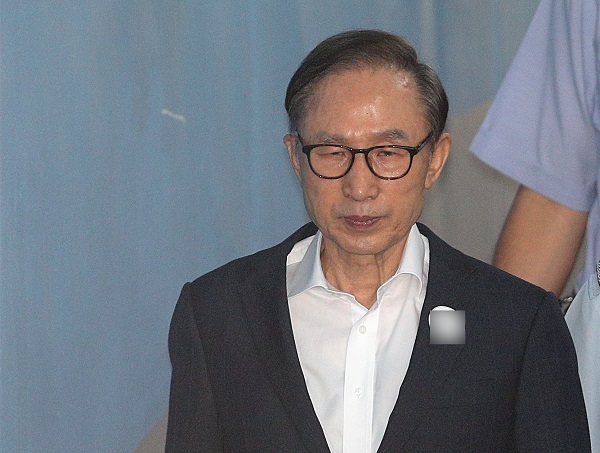 A Seoul court found former President Lee Myung-bak guilty of multiple charges of corruption, embezzlement and bribery and sentenced him to 15 years in prison Friday. It also fined him 13 billion won ($11.5 million).

The Seoul Central District Court delivered its verdict at 2 p.m. in a final trial hearing televised live by nearly all major broadcasters in the country.

Lee, who was president from 2008 to 2013, was found guilty of seven of the 16 charges leveled against him by prosecutors, making him the fourth former Korean president to be convicted of criminal charges.

“As a president vested with enormous powers by the people, the defendant had the responsibility of exercising power in accordance with the Constitution and the law,” said Jeong Gye-seon, the court’s presiding judge in the ruling statement. “But former President Lee’s actions not only damaged the impartiality and integrity of his office but also undermined faith in public service as a whole.

“Taking all this into consideration, the defendant must receive punishment befitting the gravity of his actions,” she read.

Early on in the verdict, the court acknowledged what was perhaps the most central question in Lee’s trial – the fact that he was indeed the de facto owner of DAS, an auto parts company that prosecutors believe served as a funnel through which the former president amassed funds for his political and personal activities. DAS was legally registered in the name of Lee Sang-eun, elder brother of Lee Myung-bak.

Seven of the 16 criminal charges pinned on Lee by prosecutors concerned DAS, and Friday’s decision stands as the first legal ruling acknowledgement of Lee’s ownership of the company after a decade of controversy that started in 2007, when Lee was running for president.

The court found Lee guilty of embezzling 24 billion won from the company’s coffers, citing the testimony of two of DAS’s former managers who claimed Lee ordered them to amass a slush fund on his behalf. It also recognized that the proceeds of sales from a piece of land in Dogok-dong, southern Seoul, went to Lee, despite the former president’s repeated claims that the property belonged to his now-deceased brother-in-law.

But perhaps the most condemning result for the former president is the fact that he was found guilty of receiving bribes from Samsung Electronics through DAS, allegedly in exchange for granting a pardon to the conglomerate’s chief, Chairman Lee Kun-hee, who was convicted in July 2008 for operating a slush fund to bribe influential prosecutors, judges and politicians.

In early 2009, Samsung allegedly paid around $5.8 million in legal fees on behalf of DAS in a trial in the United States. In December that year, Lee Kun-hee was pardoned by Lee Myung-bak after serving only four months in jail.

The court judged Samsung’s payment to contain enough reciprocity to be considered a bribe, citing the testimony of former Samsung Electronics Vice President Lee Hak-soo – widely known as the de facto second-in-command of the conglomerate at the time, who claimed an attorney handling DAS’s case approached him with the proposal of a promise to pardon Lee Kun-hee.

Lee Myung-bak was also found guilty of receiving $100,000 from the National Intelligence Service (NIS), through its then-Chief Won Sei-hoon, whom Lee had appointed the country’s spy chief in 2009. Around 400 of the 700 million won that the NIS gave to the Blue House as a special operations fund was also constituted as a loss to the national treasury, a criminal charge.

The court, however, acquitted Lee on a charge that he abused his authority as president to ensure that DAS’s trial in the United States proceeded in its favor, citing a lack of evidence.

Lee was not present at his sentencing Friday, having chosen to boycott the hearing due to what his lawyers on Thursday said was concern that the broadcasting of the trial would “damage the nation’s reputation and sow discord among the people.”

Since the beginning of the trial in May, Lee has maintained that the charges against him were politically motivated and pursued by the Moon Jae-in administration in retaliation for the death of former President Roh Moo-hyun, who committed suicide after being investigated for corruption after leaving office in 2008.

Following the verdict, Lee’s lawyers called the sentencing “highly regrettable,” and said they will be considering an appeal after consulting with Lee, who is currently held in the Seoul Dongbu Detention Center, southern Seoul.