Some of the seasonal dishes available at Onjium in Jongno District, central Seoul, at the moment. The restaurant serves Korean food made with recipes that chefs and staff came up with based on research in documents written decades or even centuries ago.

Many people have a restaurant or two that they return to regularly, and it’s an added attraction when these favorites add a new twist to their menus and service. Two higher-end spots, the French restaurant Pierre Gagnaire a Seoul and the Korean restaurant Onjium, have recently made themselves more readily available to those wanting a special dining experience.

Both restaurants, although differing greatly in their cuisines, have recently taken steps to offer a dining experience just as memorable but more accessible than in the past.

Onjium, which used to be a one-table restaurant that offered reservations for a minimum six people, now has a larger venue to cater to multiple parties for lunch and dinner on weekdays. The restaurant, whose original concept was a culinary research lab to study older recipes and devise ways to make them more modern for the tastes of this generation, started to change its seating about two months ago. It is located in Seochon, in central Seoul’s Jongno District.

With more private space available for customers, the place where many could taste dishes that aren’t widely available elsewhere is becoming a hot spot in a neighborhood where other traditional Korean culture can be seen. 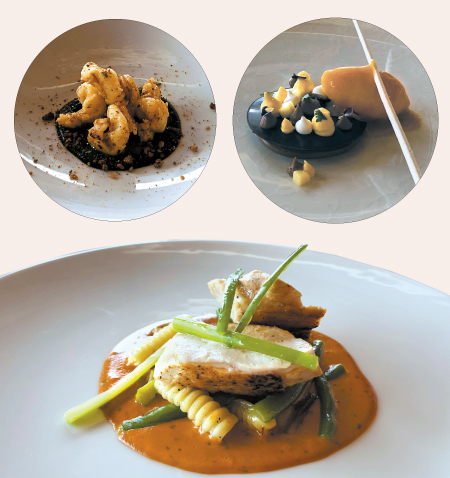 Pierre Gagnaire a Seoul now serves a quick lunch menu, which can be served and finished within an hour, to cater better to businessmen who can’t spare much time for lunch. [ONJIUM, LEE SUN-MIN]

“Many people weren’t happy because they couldn’t come back easily; they couldn’t get a reservation on the days they wanted to come,” said the senior researcher and chef of Onjium, Park Sung-bae, adding that the place started to get more international visitors with the more convenient reservation system.

“In the very beginning, we limited ourselves too much; following tradition worked as a kind of handicap and so for us to be more creative, we spent five years studying and researching and have learned how to keep a balance in trying to see new things in what’s old.”

The restaurant changes its menu almost every month to use the best seasonal food at the time. Some dishes only appear for about a week until supplies run out. It used personally foraged mushrooms right after Chuseok to make a rice dish and then updated the recipe with mushrooms collected by other vendors. It now has more space to make its own fermented sauces, pickles, and alcoholic beverages. The staff at the restaurant tries to tweak the set menu from time to time to accommodate diners’ taste. For Japanese guests it limits its use of raw fish and brings out more dishes that aren’t as readily available in Japan. Koreans, familiar with smaller side dishes that usually come with rice and soup and are collectively called banchan, will see less familiar pickles and have a chance to rediscover what went into their ancestors’ daily meals.

Its recipe book, which was published in 2016, has been sought after by chefs who want to learn more about the roots of the dishes Koreans consume these days. It is often carried overseas by Korean chefs to inspire chefs in other countries to get more interested in this Asian cuisine.

While the restaurant spreads the word on Korean food to both locals and internationals, the new version of Pierre Gagnaire a Seoul puts France on Seoul’s plates. The eponymous chef is one of the most renowned international figures on the food scene. His Seoul restaurant, which originally opened in 2008, closed for a yearlong renovation last year. It opened its doors again last month, welcoming guests who want to experience the French restaurant vibe in Seoul.

With the physical makeover, it also changed its offerings a bit. It has introduced a shorter three-course lunch, which can be served within an hour for the busy businessmen who are abundant in the area. The price has also gotten a little lighter, at 75,000 won ($66) to make French dining here more affordable. The style of food and service for the lunch has also moved away somewhat from the ultra-sophisticated standard. But so that even novices at haute cuisine can get a sneak peek at the “full service,” the dessert course is still plated with the pomp and sophistication that marks elegant French dining.

To keep the “feel” of the restaurant the same as it had been for its first 10 years in Seoul, the interior has been little changed. Located in the Lotte Hotel Seoul in central Seoul’s Jung District with a view of northern Seoul adorned with tough mountains and traditional Korean palaces, the restaurant still has yellow as its motif to set off the dazzingly white tablecloths.