Over the last 15 years, IFEZ has developed into a high-tech city that is a hub for logistics, trade, business and tourism. It has gained international attention for its reclamation of the Songdo tidal flats and has maintained its position as a truly global luxury city through constant evaluation.

IFEZ’s achievements over the past 15 years, including the development of the biopharmaceutical cluster, the Incheon Global Campus and Yeongjong Complex Resorts — which make up about 67 percent of Korea’s free economic zones — are unprecedented on the global stage, according to experts.

“Many of the achievements have been made possible by the enthusiasm and efforts of IFEZ employees and the love and encouragement of Incheon citizens,” said IFEZ Commissioner Kim Jin-yong. “IFEZ not only responds quickly to new environmental changes such as the fourth industrial revolution, but also will mobilize internal capabilities and utilize external resources to stand out as a global city in the world.“

IFEZ was designated as Korea’s first free economic zone on Aug. 11, 2003, and was officially opened on Oct. 15 of the same year.

In the early 2000s, Northeast Asia emerged as one of the top three trading regions in the world. In a bid to counteract the so-called nutcracker scenario — an expression sometimes used in Korea to describe the idea of Korea being crushed by the larger Chinese and Japanese economies — Songdo, Yeongjong and Cheongna were designated as free economic zones.

Although the development plan is expected to be finished by 2022, when the third phase will be completed, IFEZ anticipates that development will continue after the target date.

Considering that, until recently, Songdo was nothing more than a tidal flat, the current status is a dramatic improvement.
Yeongjong District’s development concept comprises air logistics, tourism and leisure complex and the area reached a development rate of 89.2 percent.

Over the last 15 years, IFEZ has really proven its worth in terms of foreign direct investment. IFEZ ranked first among free economic zones in Korea at $1.2 billion as of the end of September.

Since the opening of the company in 2003, a total of $11.8 billion has been invested from overseas, the highest in Korea and 67 percent of the country’s total free economic zone foreign direct investment. 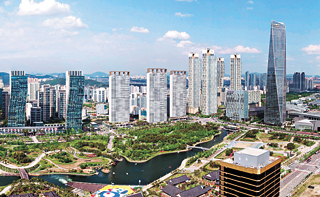 One of the most remarkable achievements of the last 15 years is the establishment of Songdo International City as a global biopharmaceuticals hub.

With prominent plants belonging to both Samsung BioLogics and Celltrion, Songdo now has the largest total biopharmaceutical production capacity of any city in the world.

It will also push forward with an ambitious plan to link Songdo Severance Hospital and Science Park to really establish Songdo as the world’s best hub for biopharmaceutical and medical industries. 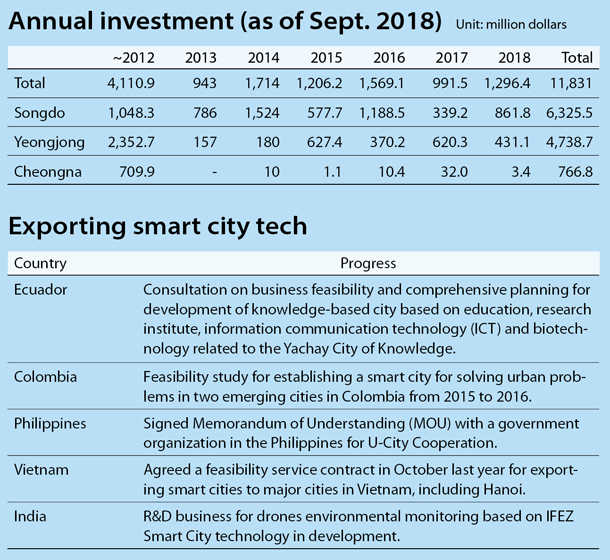 Last March, an agreement was made to include Yonsei University’s international campus in the Incheon complex. The agreement also included a timeline for the early opening of Severance Hospital and the opening of the Science Park.

At the same time, IFEZ opened a training center in Okuma, Japan, which has the world’s best technology in factory automation systems to lead the manufacturing industry.

IFEZ’s smart city is attracting attention from all over the world. The New Cities Summit, held in Songdo in June last year, was a global opportunity for IFEZ to show off its state-of-the-art smart city technology and the city services it offers in various public areas, such as traffic information, infrastructure, security and disaster prevention.

The smart city technology now has such a good reputation on the global stage that IFEZ is looking into opportunities to export the system, with particular interest from Southeast Asian and South American cities.

As IFEZ continues to develop, various hurdles have arisen and been resolved. One of the biggest issues that IFEZ has solved is the third bridge construction.

After initial delays IFEZ will finally begin constructing a third bridge linking Cheongna and Yeongjong in 2020 and complete it by 2025.

As the construction of the third bridge was a campaign promise by Incheon Mayor Park Nam-chun, it is likely that development will be sped up to be completed ahead of the 2025 deadline.