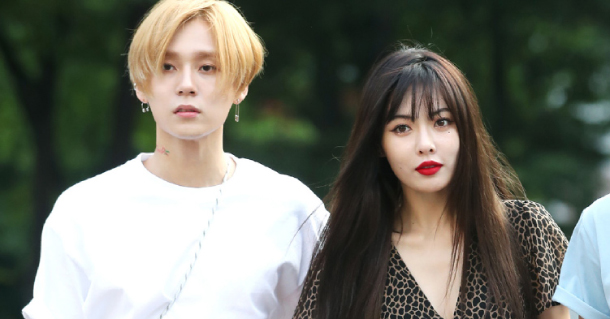 Singer HyunA has officially parted ways with her agency Cube Entertainment 10 years after signing with the company.

“We have come to an agreement with HyunA to end our contract [with the singer],” the agency said on Monday. “We sincerely thank all the artists and fans who have stuck by us through everything.”

The news came one month after Cube announced that it would terminate contracts with HyunA and her boyfriend E’dawn, who is a member of the agency’s boy band, Pentagon, for breach of trust.

Meanwhile, a letter handwritten by HyunA to the head of the agency was also revealed on Monday. In the letter, HyunA said that she had been working very hard with the company.

“I don’t know what I’ve done wrong to have all my scheduled appearances canceled since September without prior notice,” she wrote in the letter.

Referring to the contract’s termination, she added, “I hope everything ends well.”

In July, HyunA and two of Pentagon’s members, E’dawn and Hui, formed the group Triple H and released the album “REtro Futurism.”

On Aug. 2, local entertainment news outlet TV Report published a story saying that HyunA and E’dawn were dating. Cube Entertainment denied the report and said that the article was false, but the couple refuted the denial the next day during an interview, saying that they were actually a couple.

Around the same time, HyunA posted on social media that she wanted to be honest and has been posting photos with E’dawn on Instagram ever since.

On Sept. 13, the agency announced that they were terminating the contracts of both of the singers which was met by outrage from fans and a dip in the company’s stock prices.

Since the turmoil, both of the singers have not appeared at scheduled performances. All of Triple H’s concerts and promotional activities were canceled, and E’dawn was left out of Pentagon’s fan meetings and concerts in Japan.

According to the agency on Sept. 22, E’dawn was “sick,” and he “needed enough rest and care.”