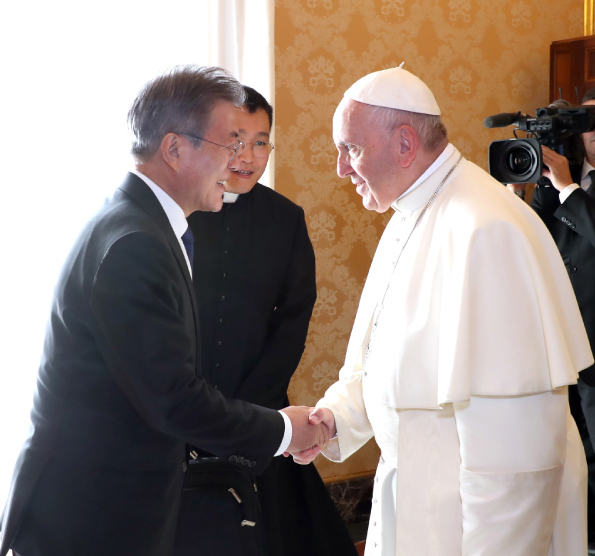 South Korean President Moon Jae-in on Thursday met with Pope Francis in the Vatican for an hour on his last day in Rome before departing for Brussels, wrapping up an eventful stop in the ancient city on the second leg of a nine-day European trip.

The meeting between the president and the head of the Catholic Church began at 12 p.m. and lasted about an hour.

While details of the hour-long meeting were not available as of press time Thursday, Moon was expected to have extended North Korean leader Kim Jong-un’s invitation to the Pope to visit his country.

Kim told Moon at a summit last month in Pyongyang that he would like to have the pope come to his country, a surprising remark given the track record of his regime crackdown on religious freedom in order to glorify the Kim family dynasty.

According to the Blue House, Moon first floated the idea of inviting the leader of the Catholic Church to Pyongyang to Kim during their summit, and Kim replied that he would “wholeheartedly welcome the pope.”

If realized, the pope’s visit to the reclusive state could help Moon’s mediation of denuclearization issues between North Korea and the United States. It would be a propaganda coup for the Kim regime, which has already gotten increased legitimacy from a summit between Kim and U.S. President Donald Trump in Singapore in June.

What would be the first papal visit to the North could also appeal to Christian fundamentalists, who consider North Korea one of the last frontiers for conversion. But plenty of hurdles remain for such a visit to be realized, especially the fact that North Korea is considered one of the worst countries in the world for religious freedom.

The Vatican could demand Pyongyang to address the issue of human rights violations, perhaps by closing some political concentration camps, as a precondition for the papal visit.

Moon may have discussed with the pope specific ways to achieve peace on the Korean Peninsula through denuclearizing North Korea and thanked the pope for his continuing support for peace on the peninsula.

Moon’s meeting with the pope was conducted in a private audience, which bars recordings or other attendees. Only interpreters joined the meeting.

His meeting with Pope Francis carried special personal meaning for Moon, who is a Roman Catholic.

In a book he published in 2017 entitled “Republic of Korea asks Moon: Moon Jae-in promises a whole new country,” which compiled interviews he had given, Moon noted that he had worn a rosary ring for “more than 20 years” at the urging of his mother, a Catholic. “My mother gave me this rosary ring more than 20 years ago, in 1995 or 1996, saying I should wear it at least if I can’t make it to church often. I’ve never taken it off since then,” he said.

Another highlight of his time in Rome was his attendance of a special mass for peace on the Korean Peninsula presided over by Cardinal Pietro Parolin, the pope’s top diplomat, who began the visit to the Vatican a day before by welcoming President Moon and first lady Kim Jung-sook in Korean.

“I welcome President Moon Jae-in and first lady Kim Jung-sook. I deliver blessings from Pope Francis. I now pray for the peace on the Korean Peninsula,” said the cardinal in Korean at the mass held in St. Peter’s Basilica, which began at 6 p.m. Wednesday. “After so many years of tensions and division, the word ‘peace’ can ring out fully,” remarked Parolin in his homily at the mass.

Moon delivered an address before an audience of 800, partly thanking the Vatican for its continuing support and encouragement for peace on the Korean Peninsula. “I once again express my profound gratitude for Pope Francis and the Vatican for providing encouragement and hope to the people of the South and North Korea who are aspiring for peace with a sense of restoring brotherhood,” the president said.

Remarking on the Pyongyang Declaration he signed with the North Korean leader last month, Moon said he and Kim had “proclaimed an end to military confrontation between the two Koreas as well as a Korean Peninsula free of nuclear weapons and threats with a lasting peace.”

Declaring an end to the 1950-53 Korean War and signing a peace treaty with North Korea in place of an armistice that ended the war 65 years ago, he said, would be “akin to dismantling the last remnant of the Cold War on the earth.”

Moon also reflected on the role the Catholic Church played in helping South Korea’s struggle for democracy in the 1970s and ’80s, which he took part in as a student activist against the military government.

“Priests and Catholic believers stood by the weak and persecuted. And at times, they took to the streets to stand for democracy and human rights,” he said, noting he himself had “served as a member of the Catholic commission for justice and peace as well as the commission for human rights for a long time.”

“I am immensely proud of this fact,” he said.

On Friday, Moon is scheduled to leave for Belgium to attend the 12th Asia-Europe Meeting (ASEM) summit in Brussels, where he will hold bilateral summits with leaders of Britain and Germany. Moon will travel to Denmark and return home Sunday.