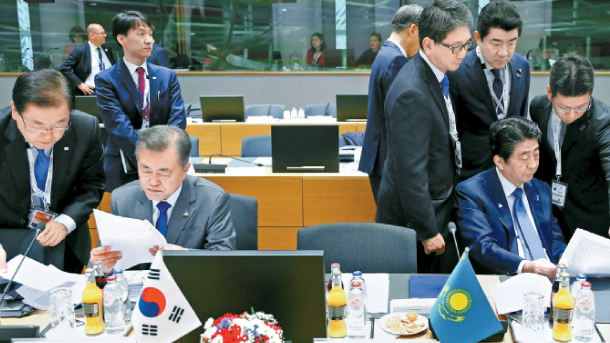 Korean President Moon Jae-in, left, and Japanese Prime Minister Shinzo Abe talk with their aides at the Asia-Europe Meeting (ASEM) summit in Brussels Friday. Moon made an address at the meeting explaining his vision of an East Asian railway community, bolstering connectivity between Asia and Europe. [REUTERS/YONHAP]

Pope Francis said he “could go” to North Korea and that he would “definitely” respond to an invitation should Pyongyang send one, during his meeting with South Korean President Moon Jae-in on Thursday at the Vatican.

The pope’s message, delivered during a 38-minute meeting with the president in a private audience only attended by the two and one interpreter, raised expectations that the leader of the Catholic Church could make an unprecedented historic visit to a state that brutally suppresses religious freedom and encourages the adoration of its ruling Kim dynasty.

“Should [the North] send an official invitation, I will answer definitely and I could go [there],” the pope was quoted as saying by Yoon Young-chan, spokesman for the Blue House.

Since no aides of Moon or Pope Francis were present at the meeting, the pope’s remarks were relayed by President Moon after the meeting to his secretaries.

The pope also reportedly said he would like to receive the official invitation from the North.

Moon’s meeting with the pope, which began at 12 p.m. local time, was a highlight of his two-day stay in the ancient city of Rome.

It was widely anticipated that the president would extend an invitation from North Korean leader Kim Jong-un to Pope Francis to come to Pyongyang, the North Korean capital.

Moon relayed Kim’s message that he would “wholeheartedly welcome” Frances if he visits Pyongyang. 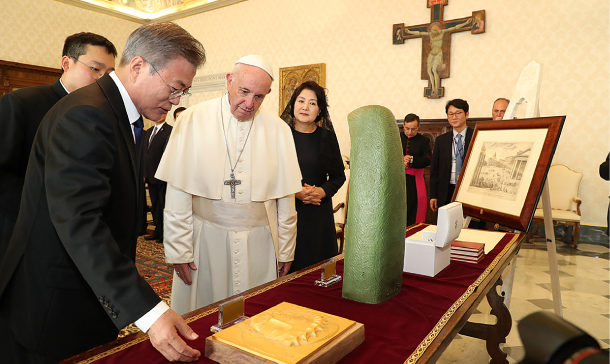 Korean President Moon Jae-in, left, presents to Pope Francis a sculpture of the Blessed Virgin Mary and a relief sculpture of Jesus Christ wearing the crown of thorns while paying a courtesy call on the pontiff in the Vatican on Thursday. The pieces were created by Korean sculptor Choi Jong-tae. Pope Francis gave Moon an olive branch, a painting of the 17th-century St. Peter’s Basilica and books he authored.[AP]

Moon also thanked Pope Francis, who has continuously expressed his support for peace on the Korean Peninsula.

“I have taken to heart your message that dialogue is the only way to solve all kinds of conflicts. As a result, North Korean leader Kim, U.S. President Trump and I were able to lay down the foundation to set in place a permanent peace regime and denuclearization on the Korean Peninsula,” Moon was quoted as saying to Pope Francis.

The pope told Moon he gave his “strong support” to Moon’s “pursuit of peace process on the Korean Peninsula.”

“Go forward and do not stall. Do not fear,” the pontiff was quoted as saying.

Attention is growing on whether North Korean leader Kim will actually send the Vatican an official invitation.

Thae Yong-ho, North Korea’s former deputy ambassador to the United Kingdom who defected to the South in 2016, described in his memoir “The Secret Code of the Three-Story Secretariat Office: Thae Yong-ho’s Testimony” the sense of alarm and shock felt by North Korean officials when they had learned of a profound religious belief still kept by a Catholic believer in the country. She confessed her unwavering faith to officials in the early 1990s despite decades of government propaganda depicting North Korea’s founder Kim Il Sung as a god-like figure.

“Once faith in God settles into the mind, it never leaves it no matter what,” the faithful was quoted as saying. Thae wrote that North Korean officials were surprised and alarmed that such religious beliefs still existed, and worried they could undermine the state.

If realized, a papal visit to North Korea could help Moon’s mediation of a denuclearization process between North Korea and the United States. It would also help the North improve its image as a gross human rights violator to that of a more normal nation. The Kim regime has already gotten increased legitimacy from a summit between Kim and President Trump in Singapore.

Critics would say such a visit would be a propaganda coup for the North and let it off the hook for violating basic human rights, such as running camps for political prisoners.

In an interview with the BBC on Oct. 12 in Seoul, Moon said that bringing the North into contact with the outside world is a better way to get it to change its behavior than mere pressure.

On Friday, Moon attended the 12th Asia-Europe Meeting (ASEM) summit in Brussels, the third leg of his nine-day overseas visit to Europe.

The biennial event hosted heads of 51 countries, 21 from Asian and 30 from Europe, with the theme of “Global Partners for Global Challenges.”

Moon also had a series of summit meetings with Britain, Germany and Thailand starting from 10:30 a.m. local time on the sidelines of the ASEM meeting.

During his meeting with Prime Minister Theresa May, Moon explained developments in inter-Korean relations this year as well as his efforts to achieve peace and complete denuclearization of the Korean Peninsula, according to the presidential office.

He also asked for Britain’s continuing support for positive changes on the Korean Peninsula.

In response, Prime Minister May praised efforts by the Moon administration and promised support. It was the second meeting for the two leaders, who had their first meeting in September 2017 at the United Nation General Assembly.

Moon’s asking for Britain’s support for his North Korea initiative echoed his request to President Emmanuel Macron on Monday in Paris.

The event seeks to work toward green growth and the UN’s Sustainable Development Goals.

It aims to find ways to fuel sustainable growth through innovative partnerships among heads of states and leaders of international organizations.