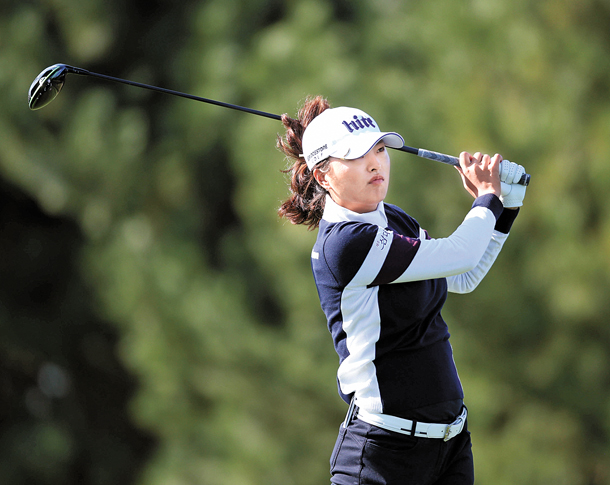 The LPGA Tour announced Wednesday that Korean golfer Ko Jin-young has clinched the Rookie of the Year award with four tournaments left in the 2018 season.

Ko leads the race with 1,137 points, followed by Georgia Hall with 754 points. Hall has no chance of taking first place as she will only play in the season finale, the CME Group Tour Championship.

Rookies earn 150 points for Tour victories, 80 points for runner-up finishes, 75 points for taking third place and so forth. Points are doubled at the five major championships.

Ko is the 12th Korean to win the award. She follows Kim Sei-young in 2015, Chun In-gee in 2016 and Park Sung-hyun in 2017 as the fourth consecutive Korean to be named rookie of the year.

Ko will receive her award at the Rolex LPGA Awards ceremony on Nov. 15 at Tiburon Golf Club in Naples, Florida, during the week of the Tour Championship.

“I feel honored to clinch the Rookie of the Year award here on the LPGA Tour, which I wasn’t able to get on the KLPGA Tour,” Ko was quoted as saying in LPGA’s press release. “I really enjoyed my first season on the LPGA, and I am looking forward to having another energetic season next year.”

Ko, who turned professional in 2013, joined the LPGA Tour after a successful career on the KLPGA Tour, where she won nine tournaments over four seasons.

However, it wasn’t until the Jeju Samdasoo Masters in August 2017 that Ko captured her first win of the 2017 season. A few weeks later, Ko captured her second victory of the season and ninth victory of her career. After a successful 2017 season on the KLPGA Tour, Ko earned her LPGA card by winning the KEB Hana Bank Championship as a non-member in October 2017.

Ko won her first official LPGA start in February at the ISPS Handa Women’s Australian Open, becoming only the second player, after Beverly Hanson in 1951, in the Tour’s history to win in her debut.

In the 22 tournaments Ko competed in this year, she recorded 11 top-10 finishes, which includes a win and a runner-up finish. With a strong rookie season, Ko is now ranked 11th in the Rolex Women’s World Ranking.

In other categories, Ko is the tour’s leader in greens in regulation at 77.44 percent and second in scoring average at 69.6 strokes per round, trailing behind Ariya Jutanugarn with 69.4.