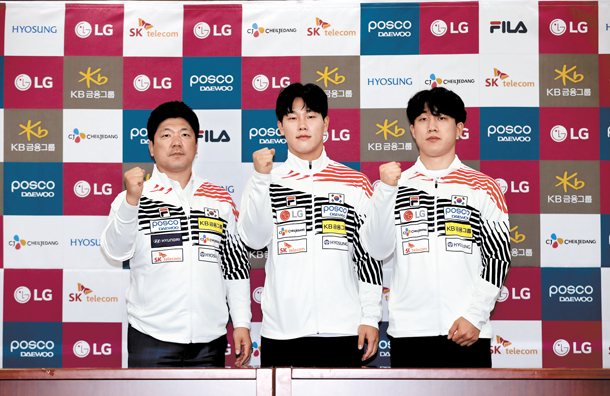 The highly decorated team took home gold in men’s skeleton and silver in four-man bobsled - the first medals of any color to be won by an Asian country in either sport - establishing Korea as the new force to be reckoned with in sliding sports.

But just eight months later, that dominance may be coming to an end, and not due to any kind of external threat. The team revealed at a media day on Tuesday that Korean sliding sports are in grave danger of slipping back about 10 years due to a lack of facilities and investment.

“I feel like I became a liar to the players,” said head coach Lee Yong.

Team Korea’s problems start with facilities. Having cost 114.1 billion won ($100 million) to build, the Alpensia Sliding Centre, the first sliding center in Korea and second in Asia, has not operated since the Olympics ended.

Even if the team had somewhere to train, the trip down the ice might be an uncomfortably experience - Hyundai Motor Company, who spent about 5 billion won per year building sleds for the team, has pulled out.

Finances have also been cut. Offseason training expenses for the team have been reduced from 1 billion won to 200 million won, and two foreign coaches have been let go. The entire staff for the sliding team, which covers men’s and women’s skeleton, luge and bobsled events, has been cut by 20 percent to just 40 people.

Due to such changes, the Korean sliding team wasn’t really able to prepare for the upcoming 2018-19 season. Over the summer, the players were only able to maintain their general fitness through running and weight lifting. Since the racers weren’t allowed to use the indoor ice track, they were given no choice but to train at the outdoor track in Pyeongchang, where they had to race in a sled with wheels instead of blades.

“During the offseason, I didn’t get to set foot on ice, not even once,” said bobsledder Seo Young-woo.

There was no special treatment for the biggest stars.

“Prior to the Olympics, I gained confidence from a lot of training,” said Olympic gold medalist skeleton racer Yun Sung-bin. “But after the Olympics, our sliding facility has gone back to the past. Since I didn’t get proper training, I obviously lost confidence.”

Before Korea hosted the PyeongChang Olympics, the sliding team was given no support at all. Before the infrastructure for the Games were built, the teams trained on an asphalt road and often had to borrow sleds from other teams. The athletes’ hard work brought about Korea’s own “Cool Runnings” moment - Yun became the No. 1 skeleton slider in the world and the two-man bobsled team of Won Yun-jong and Seo took home the International Bobsleigh & Skeleton Federation (IBSF) World Cup title in 2015.

Once Team Korea proved that sliding down the ice was well within its wheelhouse, the government finally stepped in and offered some support, leading to Korea’s historic gold and silver medals at PyeongChang.

But the minute the Games ended, the team was locked out of Asia’s newest sliding facility.

The Alpensia Sliding Centre is highly rated internationally, so much so that the Korea Bobsleigh & Skeleton Federation won its bid to host IBSF World Cup races during the 2019-20 and 2020-21 season as well as the 2023 world championship. The federation may now be forced to return the bid.

“I think the international federation will have another meeting related to this issue,” said Lee. “It’s just disappointing.”

The Korean sliding team headed to Canada on Wednesday to start preparation for the new season’s World Cup events. They aren’t off to the best start, as transporting sleds and equipment eats into the federation’s already stripped-down budget.

“If the members that won silver at PyeongChang train for the next four years, we can expect a gold medal at the 2022 Beijing Olympics,” said Kim Dong-hyun, who raced in the four-man bobsled at PyeongChang. “But in this situation, I am seriously concerned that we might be going back to how we were 10 years ago. The equipment the national team uses is about three to four years behind the countries we compete against. Under this reality, all we can do is to try our best.”

But it’s not only the sliding team that is struggling after the Olympics. The Korea Skating Union and the Korea Curling Federation have both been designated as needing to “receive special care” due to a series of corruption scandals. As the two organizations cover speed skating, short track, figure skating and curling, Korea’s best winter sports lack guidance and oversight.

The Korea Ski Association has also had to cut down its coaching staff in cross-country skiing, snowboarding and alpine skiing due to a reduced budget.