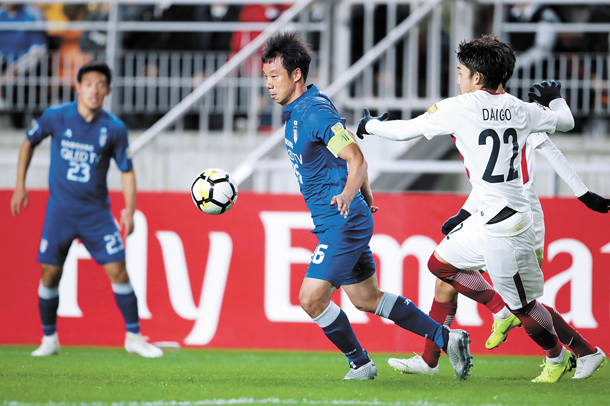 The battle for the Asian Football Confederation (AFC) Champions League spots will start intensifying in the top Korean football league this week as the teams enter the split round.

The K League 1 operates under a split system, in which 12 teams are divided into two groups after playing 33 matches. The teams then play five more matches within their group.

This season, Jeonbuk Hyundai Motors claimed the K League 1 title even before the split, meaning those in the upper group, or Group A, will no longer contend for the league trophy. But the teams in Group A, except for Jeonbuk, will still be fighting for next year’s AFC Champions League (ACL) spots.

The top two teams in the first division directly advance to the ACL group stage with the Korea Football Association (FA) Cup winners.

The third-place team in the K League 1 needs to go through a playoff round to join them in the group stage.

Gyeongnam FC are sitting second in the league table with 58 points, but they’re only two points above No. 3 Ulsan. Kim Jong-boo’s side is having a sensational season after earning a promotion from the second division, and they will try to wrap up the season on a high note with a ticket to the ACL group stage.

Gyeongnam will begin their split round campaign with a match against Ulsan on Sunday. It will be a critical match for both teams.

Ulsan will aim to take Gyeongnam’s position and also target the FA Cup trophy. Ulsan are scheduled to meet the Suwon Samsung Bluewings in the FA Cup semifinals. For Ulsan, securing an ACL group stage spot is crucial.

Suwon are currently fourth in the league with 49 points and will compete for the ACL spot. But even if Suwon are confirmed for fourth place, there is a chance to make an ACL appearance.

Should Ulsan win the FA Cup trophy and finish third in the league, Suwon will inherit the ACL playoff berth.

But Suwon are not guaranteed to keep their current position. They’ll open the split round with the top dog Jeonbuk. And the Pohang Steelers and Jeju United are trailing close behind Suwon with 47 points and 44 points, respectively.

For the teams in the lower group, or Group B, there’s only one goal: avoid relegation.

The worst team in the K League 1 will be directly demoted to the K League 2. The second-worst team will have to survive in a playoff with a K League 2 team to remain in the top flight.

With five matches remaining, no team in Group B is safe from relegation.

No. 7 Gangwon FC and No. 8 Daegu FC both have 39 points, followed by FC Seoul with 35 points and Sangju Sangmu with 33 points.

Jeonnam Dragons are sitting in 11th place with 32 points, only two points above the bottom-ranked Incheon United.

Among them, Seoul, six-time league champions, are playing in the lower group for the first time since the split system was introduced in 2012. Seoul, Jeonnam and Incheon are the three teams in Group B that have not been relegated to the K League 2.