From left: Hongwonsam, a red ceremonial robe, and a royal veil from the Joseon Dynasty (1392-1910) are displayed at the "Fortune Land - Gold Leaf" exhibition In Yongsan District, central Seoul. [AMOREPACIFIC]

The exhibition is the latest edition of the Sulwha Cultural Exhibition, a series of cultural events that celebrates its 12th anniversary this year. The company uses the exhibition series as a platform to promote and encourage communication between generations so that younger visitors can understand and sympathize with the traditions of the older generation.

The Sulwhasoo brand represents the Korean spirit and culture inspired by the universal beauty of tradition. It is focused on harmony and balance without excess and concentrates on the beauty of the tradition that has supported and nurtured Korea through the principles of life and nature.

It was this brand image that inspired the Sulwha Cultural Exhibition’s focus on tradition and contemporary coexistence. 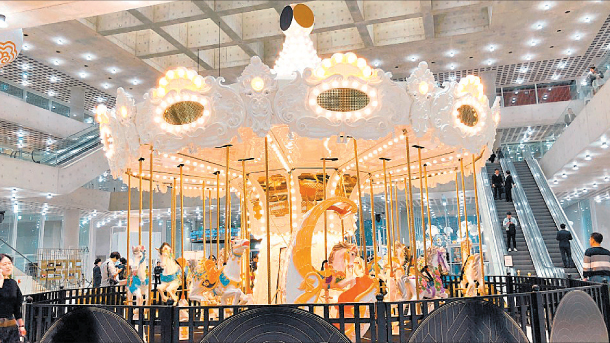 Amorepacific cosmetics brand Sulwhasoo tries to convey the values of tradition, craftsmanship and beauty in an ever-changing world.
Sulwhasoo has been paying especially close attention to traditional crafts and is working to help modernize the practices that are at the root of Korean culture and become a driving force for creation.

In 2003, Sulwhasoo, together with over 40 artists, formed the “Sulwha Culture Club” to support traditional Korean culture gatherings and artists, leading the way in promoting local artistic traditions. In 2006, the “Night of Sulhwa Culture” was launched, becoming the foundation for the Sulwha Cultural Exhibition.

The Sulwha Cultural Exhibition is a cultural event intended to publicize Korean beauty by reinterpreting the value of Korean culture in a modern way. This is in line with Sulwhasoo’s philosophy of encouraging communication between generations so that younger people can understand and sympathize with the country’s traditions by reinterpreting them with a modern twist.

Just as aesthetics and practicality found in our traditional culture have been revalued through Sulwhasoo products, the brand has also succeeded in reinterpreting the magnificent beauty of tradition through the Sulwha Cultural Exhibition.

Sulwhasoo has broadened the scope of Korean traditional cultural activities by donating the proceeds from the sale of artworks at the cultural exhibition to a non-profit cultural foundation.

Sulwhasoo has promoted Korean culture through its annual Sulwha Cultural Exhibition since 2007. [AMOREPACIFIC]

The 2018 exhibition highlights the beauty of gilding, which is a traditional technique that uses a thin layer of gold leaf layered on fabric.
The gilded pieces that will be highlighted in the exhibition are made using both traditional and contemporary techniques. In one work, gold leaf has been shaped to show the robe of a praying Buddha through the use of both contemporary and traditional skills.

The exhibition will include various works from 13 teams of artists. The teams, who all have backgrounds in different mediums, have created new pieces under the theme “Gold Leaf Art.”

In addition, three pieces in the exhibition come from Kum Bak Yeon, a gold-leaf workshop that has been handed down through five generations since the Joseon Dynasty (1392-1910). Kim Ki-ho, the current master, is Korean Intangible Cultural Asset No. 119.
Like all Sulwha Cultural Exhibitions, the gilded art is intended to show visitors the harmony of traditional techniques and modern beauty. The lobby on the first floor will house the “Oriental Fantasy Theme Park,” which provides an opportunity for visitors to interact and participate with various works of art to better understand the project.

The exhibition will be held from Oct. 16 to Dec. 14 at Amorepacific’s headquarters in Yongsan District, central Seoul. Reservations can be made at www.sulwhasooculture.com or on arrival for non-Korean speakers.