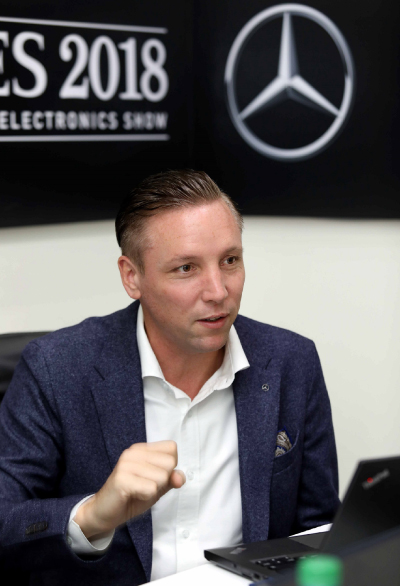 Mercedes-Benz was the only automaker to set up a booth at the Korea Electronics Show (KES), an annual exhibition where tech companies show off their latest products and ideas.

The German automaker returned to KES for a second year. The event, which is typically popular with consumer electronics makers and technology developers, was held over four-days starting on Wednesday at COEX, southern Seoul.

Though the automaker might seem like an unusual match, Jochen Schaefers, head of communications for the automaker’s procurement and supply quality department, says it is a reasonable move considering the importance of Korean suppliers to Mercedes and the level of technology that electronics companies and start-ups in Korea show off. When the automaker comes to the event, they bring specialists to spot new technological trends and apply it to their cars, he said.

“Korean suppliers are very important to us, and we need to have presence here in Korea,” Schaefers said as he sat down for an interview with the Korea JoongAng Daily on Wednesday on the sidelines of the Seoul-based event. “We are here to find new start-ups with new innovations to bring to our cars.”

According to Schaefers, the KES is the only exhibition the automaker’s procurement team has a presence at other than the Consumer Electronics Show, a much larger global fair held annually in Las Vegas.

“Of course we have many other presence of Mercedes-Benz at big shows, but the event that we go to as [a] purchasing department for our own show is only here in Korea,” he said. “Do you see how important it is for us?”

Currently, there are about 50 to 60 Korean companies supplying parts to the German carmaker, and their supplies account for roughly 10 percent of the automakers’ total spending on parts.

Schaefers said supplies from Korean companies will increase as parts sourced here are important to its future car lineup, including electric cars and connected cars, though he declined to give detailed figures.

“Battery cells, displays, software for navigation and map data are the core competency of Korean suppliers,” he said. “It fits perfectly to our CASE strategy.”

“In almost every letter, you see here, we find Korean suppliers that supply us,” he said adding that Mercedes is dependent on Korean suppliers for battery cells as it strives to make one-fourth of its cars electric, hybrid or even fuel-cell powered by 2025.

“We [buy] cells from SK Innovation and LG Chem,” Schaefers said. “SK Innovation is a very reliable supplier for us for plug-in hybrids.”

“Korean suppliers have technical efficiency [and offer products that are] cost competitive,” he added.

According to Schaefers, the company has identified more than 200 potential suppliers from Korea, including start-ups, and is in talks for cooperation.

Though this year’s figures are not ready yet, the German carmaker said deals with Korean suppliers doubled last year compared to 2016 in terms of price rather than units, and sourcing activities in Korea will continue to increase.