Save the earth and cut costs with eco-wedding

Save the earth and cut costs with eco-wedding 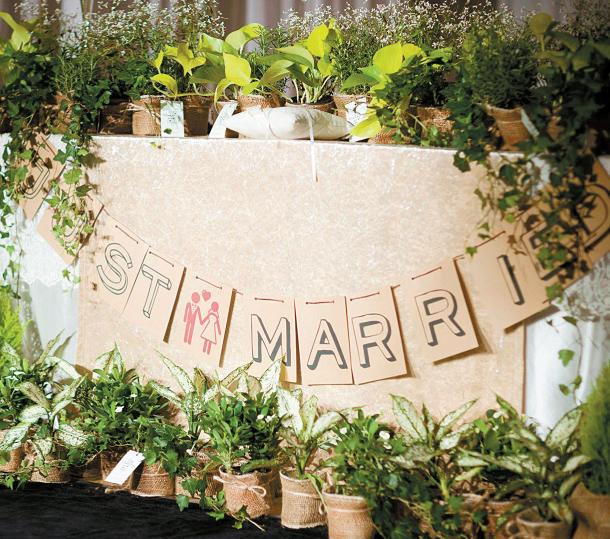 Sewing for the Soil decorates the venue with potted plants instead of cut flowers. Guests can take the plants home. [SEWING FOR THE SOIL]

A wedding planning service that makes biodegradable dresses and eco-friendly invitation cards has been recognized by the government for going green.

The Korea Environmental Industry & Technology Institute (Keiti) announced Monday that wedding planner Sewing for the Soil has received a Carbon Emissions Certification. The Keiti, a quasi-government organization affiliated with the Ministry of Environment, awards the certification to low-carbon offerings from companies that calculate and display the total quantity of carbon dioxide produced during the production, distribution, use and disposal of their products.

Manufacturers of products or providers of services with the certification can qualify for government benefits, while consumers who purchase them can collect points that translate into monetary rewards. A total of 2,069 products and services received the Carbon Emissions Certification as of September 2018.

Headed by designer Lee Kyung-jae, the company offers biodegradable wedding dresses made of nettle or traditional hanji paper that can be reused as everyday wear after the ceremony.

Sewing for the Soil hosts eco-friendly wedding services at its office. It decorates the wedding venue with flower pots that newlyweds can give to their guests as presents. The company also prints invitation cards on eco-friendly paper and gets hybrid or electric cars to drive the newlyweds after the ceremony.

The so-called eco-wedding is said to cut waste by about 38 percent.

“An eco-wedding hosted at Sewing for the Soil only produces 27.5 kilograms (60 pounds) of carbon dioxide per couple, while a typical wedding produces 44.7 kilograms,” said a Keiti spokesman.

Sewing for the Soil’s wedding services not only promise to reduce waste, but costs as well.

An eco-friendly wedding from Sewing the Soil reduces costs 30 to 40 percent, according to Keiti. The company saves money by only ordering portions that correspond to the exact number of guests rather than serving food buffet style. The biodegradable dresses are also less expensive than traditional garments made of synthetic textiles.