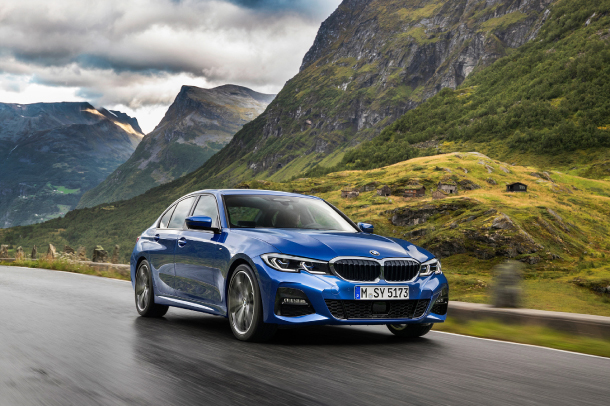 BMW’s flagship 3 Series sedan is returning to the Korean market with upgraded agility and design. It is expected to debut here in March 2019.

The German premium carmaker unveiled the new seventh-generation 3 Series at this year’s Paris Motor Show. The midsize sedan is one of BMW’s best-selling models, having sold more than 15 million units globally.

The saloon’s signature kidney-shaped grille, which was divided in half in the previous version, is now a single chrome frame. The grille is also connected to the headlights.

The interior underwent an upgrade as well, with passengers’ convenience as top priority. It has gotten more spacious, with a more driver-centric dashboard.


A new menu has been added to the vehicle’s control display, and the center console has gotten taller.

Control buttons are positioned intuitively for passengers’ convenience. Buttons for the air conditioning are located in the center of the instrument panel. Lights are controlled from the side of the steering wheel, and the start-and-stop button for the engine is now positioned in the center console rather than behind the right side of the steering wheel. It is positioned next to the newly-designed selector lever and electromechanical parking brake.

The new 330d model has a 6-cylinder diesel engine. This model has a fuel efficiency of 19.2 to 20.8 kilometers per liter while generating 265 horsepower.

Aside from the hardware, the latest BMW 3 Series is equipped with a package of safety features. Collision- and pedestrian-warning systems as well as city braking functions are included in all trims of the model. City braking is a function that detects not only vehicles, but also pedestrians and bikes and warns the driver. Partially autonomous functions such as lane-keeping assisting system and active side collision protection systems are also available as options.

BMW is introducing its artificial-intelligence assistant system, dubbed BMW Intelligent Personal Assistant, for the first time in the latest 3 Series. The assistant responds to “Hey, BMW,” or any other name the owner chooses, and informs the driver of the vehicle’s various functions as well as its current status. The assistant will be regularly updated as new functions are rolled out.