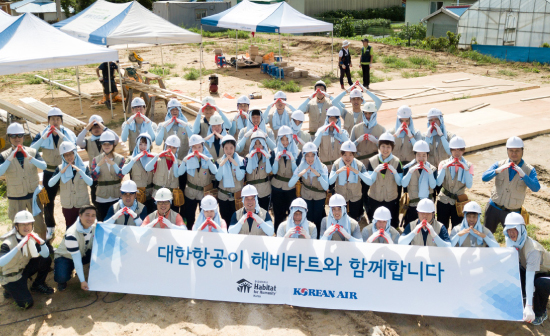 As a leading global airline, Korean Air works on a variety of charity activities both inside and outside of the country every year.

Korean Air puts effort into tackling global environmental issues, and has been promoting the Global Planting Project. Executives and staff members are participating in tree-planting campaigns in Mongolia, which is suffering from desertification. Korean Air established an eco-park in the Baganuur District of Mongolia and planted 44 hectares of forest. About 100,000 trees have been planted in the Mongolian desert so far.

Recently, Korean Air has sent support to Laos following its dam collapse. On July 27, Korean Air sent water and blankets via Korean Air KE461 from Incheon to Da Nang, Vietnam, as emergency aid. It was the first local company to provide aid to Laos after the dam collapse.
Korean Air also supported the construction of an elementary school in Kanchanaburi, western Thailand, for a month in July.

The elementary school, which was renovated, was established by the King’s Development Plan (Royal Project). The Royal Project is a welfare project that was started by the royal family of Thailand as part of efforts to reduce the gap between regions and improve the lives of the poor.

Korean Air has provided full support to the school’s rehabilitation projects to provide a more pleasant learning environment for elementary school children in the underdeveloped area and contribute to the development of education in the Thai community.
Korean Air has been doing charitable activities related to the aviation industry, such as quickly giving relief to disaster areas using its global transport network.

Korean Air sent relief to Pohang, South Gyeongsang, which was hit by an earthquake last November. Korean Air sent 3,600 liters (951 gallons) of water and 3,000 blankets. It also sent 9,000 liters of water and 2 tons of emergency kits when there was a flood in Peru last April.

Korean Air is also working on various activities along with its employees. There are 26 in-house volunteer groups that 4,000 employees are actively participating in.

One example of an in-house volunteer group is Sky Angel, which is composed of cabin crew members. Sky Angel operates a Sky Love Bazaar every year. Sales are made with donations from the employees, and the profits are consigned to the Gangseo District Office and delivered to social welfare organizations.

In-house volunteer groups work both in Korea and abroad. They visit countries that need help such as Cambodia, Indonesia and the Philippines. In addition, volunteer activities such as Habitat Hope Building, which provides shelter for neglected neighbors, are also popular.

Korean Air has also put effort into donating its talent. It has opened English schools since 2009 to offer learning opportunities to elementary students living near Incheon International Airport who have difficulty getting English tutoring after class. The English class is held twice a year in the spring and fall semesters. It helps develop an eagerness for English through eight weeks of study.

The Junior Engineering Class is a talent donation activity that began in 2005. This was started to expand the base of engineering and technology culture and provide educational benefits for the underprivileged and the local community. It not only covers science technology used in airplanes, but also covers high technology and eco-friendly content used in daily life so that children can learn about science easily.

Korean Air is planning to build a sustainable sharing business to fulfill its corporate social responsibility and take the lead in building a strong corporate culture.