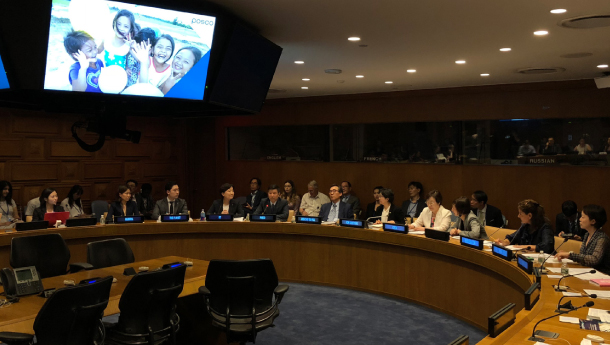 Since its founding, Posco has recognized its contribution to national development as a corporate mission and has pursued a variety of mutual growth and social contribution activities.

The Posco 1% Foundation has established a vision of “sharing 1% with the world for a better world.” Using the fund that is created by employees’ donations and matching grants from the company, diverse social contribution activity in social welfare, overseas business and culture art is on the way.

In order to solve the problem of youth housing, the Posco 1% Foundation proposed building a youth share house in Seodaemun District. The share house not only provides a place to nurture young people facing housing insecurity, but also uses five Posco technologies that are ideal for structural safety, durability and energy saving.

In addition, the Posco 1% Foundation is carrying out various projects, such as Steel Village, for domestic and overseas families who need welfare support.

The steel village development project is a project to make houses, bridges, and welfare facilities using Posco Group’s steel materials and construction methods for people living in harsh environments. It is a representative social contribution activity that takes advantage of the features of Posco’s businesses.

Volunteer workers consisting of Posco employees, volunteers from Beyond, a Posco-sponsored university group, and local fire department workers build steel houses with steel produced by Posco Group for low-income families and people whose homes were damaged by fire.

In July of this year, Posco built a steel house for an elderly couple in Pohang, North Gyeongsang, whose house burnt down due to an electricity short circuit. It was the 50th steel house built for those in need.

In order to provide a safe living environment for victims of fires, Posco has built 50 steel houses in 36 cities over 9 years since starting the steel house support project.

The steel house donated by Posco is a 13-pyeong (462 square feet) house that has two rooms, a kitchen, and a living room. Steel House uses Posco’s World Premium products for the frame and exterior materials. They can last for more than 100 years and are safe from fire.

In addition, Posco is also actively engaged in social contribution activities overseas. The Steel Village is a typical example of how Posco helps people living with poor infrastructure. Posco will start a steel village project for three years from this year to 2021, building homes and public restrooms in less-developed areas of Cilegon, Indonesia.

The Posco Steel Village Project was selected as a Best Practice for Sustainable Development Goals (SDGs) from the United Nations last November and recommended to all 193 Member States as a best practice.