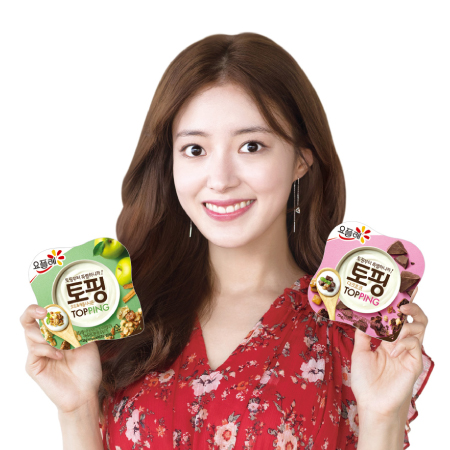 Binggrae Yoplait, the most popular brand of yogurt in Korea, has launched a new product called Yoplait Topping.

The new range comes in two varieties, Yoplait Topping Dark Chocolate and Yoplait Topping Oat & Apple Cinnamon. The focus of the new varieties, according to Binggrae, is superior but natural flavor. The topping of the yogurts has been created naturally, resulting in a crisp texture.

The topping and the yogurt are packaged separately and combined just before eating, ensuring that everything is served at the texture that it is intended to be.

Yoplait Topping Dark Chocolate is a blend of dark chocolate, crispy brownie cookies and flavored salted caramel, while Yoplait Topping Oat & Apple Cinnamon is made from oats and apple syrup.

Meanwhile, Yoplait is regarded as one of the most popular brands in the domestic dairy product market. Last year, Yoplait sales amounted to 140 billion won ($123 million), a total of 360 million units, and an average of 98 million yogurts a day.

Kale was used as the main ingredient in these products as it is known to have the highest content of beta carotene among greenish-yellow vegetables and is effective in the detoxification of carcinogens due to antioxidant activity and the inclusion of indole compounds. Kale contains chlorophyll, calcium, phosphorus, iron, fiber, vitamins B1, B2 and C, and is mainly used in salads and juice.

“Yoplait, the top brand of yogurt in Korea, is studying products while considering consumer health from the planning stage,” said a Binggrae official. “We will also showcase a variety of new products in the future.”