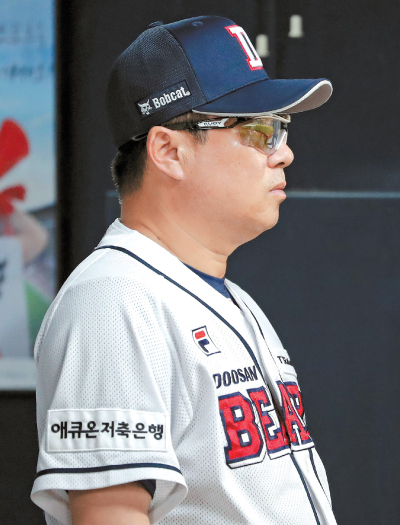 The Doosan Bears will begin their hunt for their sixth Korean Series title tomorrow.

The Bears had a dominant regular season, picking up 93 wins to 51 losses. The Bears’ 93 wins were good enough to tie the club’s record for the most number of wins in the regular season, which they previously set in 2016. As the Bears automatically advance to the Korean Series with the regular season title, the club was given a three-week break to wait for the other teams to make their way through the playoffs.

Once the regular season ended, the Bears left for Miyazaki, Japan, to start preparing for the Korean Series title. While in Japan, the Bears played two Japanese winter league games against the Hanshin Tigers and Tokyo Yakult Swallow. Once the Bears returned to Korea on Oct. 26, they played a practice game as checkup ahead of the Korean Series on Tuesday.

The Bears are expected to have the team’s two foreign pitchers start in the first two games of the Korean Series.

During the regular season, the Bears have benefitted significantly from the two foreign pitchers Josh Lindblom and Seth Frankoff. The two managed to pick up 32 of the Bears’ 93 wins this season. Frankoff led the KBO in wins, at 18, and Lindblom had the lowest ERA at 2.88.

While most of the players successfully recovered from their injuries or readied themselves for the championship, the Bears saw some unexpected absences from its players as well. Kim Kang-ryul, the club’s key relief pitcher, is not expected to play throughout the championship series, as he underwent Achilles tendon surgery. Kim was injured during the Bears’ Japanese winter league game against the Hanshin Tigers in Miyazaki on Oct. 23, when trying to cover third base.

This is likely to affect the Bears’ roster, as Kim had been a crucial member on the Bears’ bullpen. He picked up five wins and six saves in 65 games with a 4.62 ERA. However, as Chang Won-jun has now seemed to have recovered from his back injury, the Bears hope to use Chang as a replacement for Kim.

Kim Jae-hwan and Jung Soo-bin will lead the batting lineup once again. This season, Kim topped the league’s home run count, with 44, and RBI count, with 133, in the regular season. By winning the home run title, Kim became the first player from Jamsil, the stadium the Bears share with the LG Twins, to hit the most home runs since Tyrone Woods in 1998. Kim finished the regular season with a .334 batting average.

Jung hopes to repeat his success from the 2015 Korean Series. After becoming the 2015 Korean Series MVP, Jung was slowly forgotten by the Bears fans after he left for the Police Baseball Team to complete his military service. Although he didn’t return to the Bears until September, he wasted no time in making an impact on the team, finishing with a .367 batting average, two home runs and 23 RBI’s in 26 games.

Although Jung injured his finger in the Bears’ last regular season game against the KT Wiz, thanks to the three-week break, he is expected to get back in action.

The KBO also expects to see sellout crowds for the games. Although the KBO managed to sell over 8 million total tickets in the regular season for three consecutive seasons, the crowd in the postseason games this year has been disappointing.

Only the first-round playoff games between the Nexen Heroes and the Hanwha Eagles were sold out. However, as the Eagles and the Heroes have the smallest-capacity stadiums, sellouts for their games weren’t very impressive. The KBO had a serious problem in the second round of the playoffs, as all five games had plenty of empty seats.

As the Bears are returning to the Korean Series for the fourth straight season, the KBO hopes to bring back its baseball fans. Game 5 and 6 of the Korean Series games between the Samsung Lions and the Heroes in 2014 were the last time the championship series didn’t sell out.

Game 1 of the 2018 Korean Series will start tomorrow at 2 p.m. at Jamsil Baseball Stadium in southern Seoul. The Bears will play the winner of last night’s game between the Heroes and SK Wyverns. The Korean Series is played in a best-of-seven format.