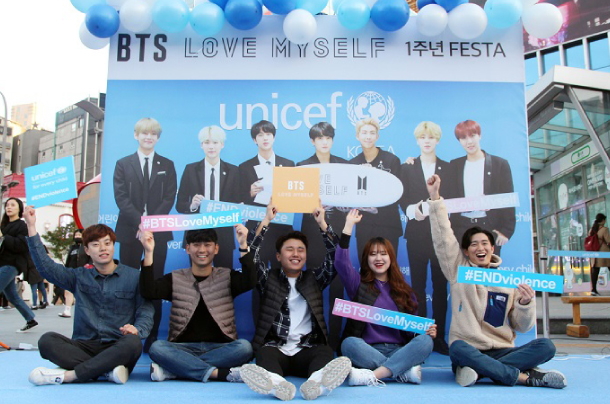 “BTS and Unicef’s collaborated campaign directed to end child violence around the world has reached 1.6 billion won in donations in one year, and the group is [still] spreading their influence through the ‘Speak Yourself’ speech they made at the United Nations,” said the Korean Committee for Unicef on Friday.

Last year on Nov. 1, BTS and its agency Big Hit Entertainment teamed up with the Korean Committee for Unicef and signed a two-year partnership to promote #ENDviolence, Unicef’s global campaign project aimed at preventing violence against children and teens.

According to Unicef, the “Love Myself” campaign, which is part of the #ENDviolence project, is an “advocacy campaign” that delivers the message, “True love starts from loving oneself.”

Unicef reported that 78 percent of the 1.6 billion won in donations came from Big Hit Entertainment and BTS’s funds including album sales and personal contributions. The remaining 20 percent came from Unicef and fans, including profits earned by selling goods at the “Love Myself” concerts.

On Sept. 24, the group’s leader Kim Nam-jun, better known as RM, spoke at the UN General Assembly for Unicef, encouraging young people to listen to their inner voice. “No matter who you are, where you’re from, your skin color, your gender identity, just speak yourself,” he said.

To celebrate one year since the launch of the group’s campaign, Unicef, the boy band and the agency are holding a small event in Sinchon, western Seoul, until Sunday. The event includes a photo wall of BTS, a video clip celebrating the one year anniversary of the campaign and a campaign booth that highlights the current activities carried out by Unicef.