Trade impacts Asia most, but Europe troubled, too

Trade impacts Asia most, but Europe troubled, too 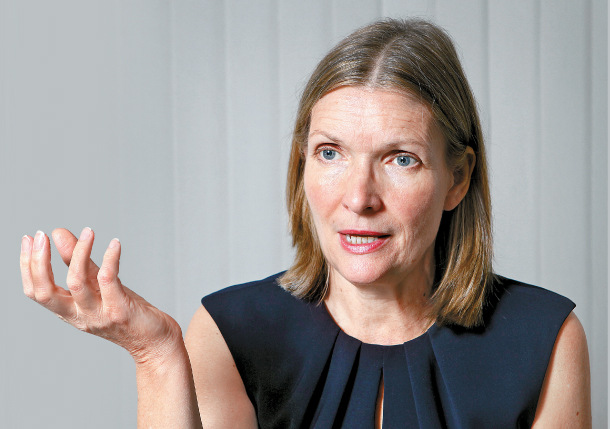 Sarah Hewin, chief economist for Europe at Standard Chartered Bank, speaks at the headquarters of the bank’s Korean branch on Oct. 23. [PARK SANG-MOON]

Following a 2017 of strong stocks and impressive economic performance, the world is now facing uncertainties. The markets of many countries - especially those in emerging economies such as Korea - are facing volatility due to the ongoing trade war between the United States and China, concerns over rising interest rates in the United States. European countries are not in a much better position, with political and economic instability following Britain’s decision to leave the European Union.

Against this backdrop, the Korea JoongAng Daily sat down with Sarah Hewin, chief economist for Europe at Standard Chartered Bank, to discuss the global economic slowdown and Brexit issue and its impact on Korea.

Q. With trade tensions between the United States and China intensifying, the International Monetary Fund and the OECD lowered their outlooks for global economic growth. Do you think the world economy is, in general, losing steam?

A. I think the trade dispute certainly is having an impact on global trade. We saw trade volumes growing quite well in 2017, and there has been some evidence of a slowdown. The tariffs that are imposed by the U.S. only recently started to take effect. So, the chances are we would see more of an impact in 2019. The hope is when [ U.S.] President Trump and [Chinese] President Xi meet in the G-20 summit, both sides could come to an agreement on trade, which would alleviate some of the concerns over trade. The tariffs recently imposed are only being noticed in the current quarter, so it is likely that its impact will linger on into the early part of 2019.

Which country or economic block could be hit hardest by the ongoing trade row?

I think it is Asia because of the strong trade flows within Asia and between China and other Asian economies. The impact is likely to be felt more in this region than in other regions, if Chinese growth slows down as a result of trade disputes. That said, Beijing is taking action to maintain economic activity, while some Asian Countries will also benefit from substituting Chinese exports into the U.S. Countries like Taiwan, Singapore, Malaysia and Korea may find opportunities to export to the U.S. because Chinese exports are facing tariffs of 10 to 25 percent.

We do see an impact in Europe, especially its effects on confidence. There have been threats of tariffs being imposed on European car exports. And that seems to be behind some of the softer activities that we have seen in the euro area this year. So, the hope is that the U.S. and EU can negotiate trade arrangements between the two. But before that happens for the time being, uncertainties are weighing on business sentiment.

Despite major central banks raising rates, the European Central Bank said that it will keep its rate at zero until 2020. What do you make of the direction?

The euro is relatively weak. A part of the reason is that markets expect the U.S. interest rates to keep on rising and ECB will keep the rate unchanged for another year. The widening differentials between the U.S. and euro area are having an impact on the currency. But there are other factors affecting the currency. Political uncertainties in Italy and the dispute between Rome and Brussels are making investors cautious about the euro.

Media outlets suggest different scenarios for Brexit, such as ‘no deal’ Brexit. Which scenario is most likely?

I expect the U.K. government to finalize the deal by the deadline set for March of next year. And then the parliament needs to agree in favor of the deal. I think that the deal will get through parliament, though it could be a close vote: some Conservative MPs will vote against the deal, and we expect that most opposition MPs will do likewise. Assuming the deal is passed, the U.K. will have two-to three years of a ‘transition period’ to negotiate a trade deal with the EU. This might be a customs-union type of agreement, though given the level of hostility to such a proposal, a free trade agreement similar to the one negotiated recently between the EU and Canada looks more likely.

The manufacturing sector will be hit by Brexit. Many manufacturers have an integrated supply chain, with production across European regions and imports of basic and value-added material into the U.K. production process. At the moment, those journeys are easy with simple, quick customs process under the EU structure. But once the U.K. leaves the EU, customs could be delayed and costs could rise.

U.K. trade secretary Liam Fox said that Brexit has contributed to boosting trade volume between the U.K. and Korea. Do you think the U.K.’s exit will significantly bolster trade ties with South Korea or other Asian countries?

The U.K. government is encouraging British businesses to look beyond the EU for new potential markets, and to boost engagement with those that are already trading partners, so longer term there should be a positive outlook for increased trade between the U.K. and Korea. The challenge near term for the U.K. will be to agree to a new trade arrangement with the EU as well as with other key trading partners, post Brexit.