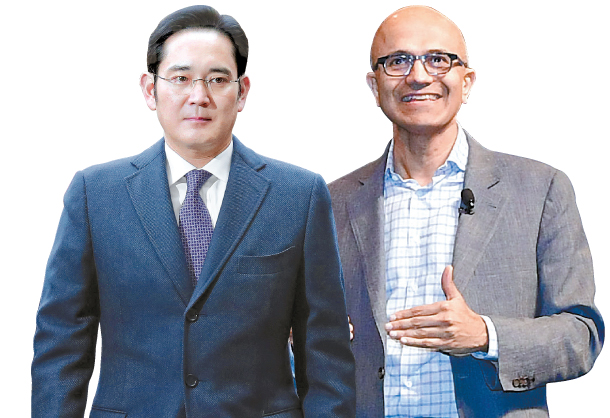 The two met in the morning before the conference and agreed to step up partnership in artificial intelligence, cloud computing and big data, said a Samsung spokesman.

Microsoft currently uses Samsung’s semiconductors for cloud servers, and Samsung could sell more of its chips to the American partner in the near future.

Media reports in Seoul say, as a result of the meeting, some Samsung devices, including smartphones, will be embedded with Microsoft cloud services in the future. Samsung already uses Azure, a Microsoft cloud computing platform, for its system air conditioners to collect data on the surrounding environment, including temperature and humidity, so the machines run more efficiently.

The two executives might meet on a regular basis and exchange ideas on tech development, according to reports. The two leaders met in Seoul four years earlier.

During his keynote speech at the conference at a hotel in western Seoul, Nadella mentioned Samsung as one of several Korean companies that had developed offerings based on Microsoft’s Azure platform.

“Take the example of Samsung Electronics’ IoT [Internet of Things]-based air conditioner that runs on Azure. By taking into account environmental factors, like the number of people, the smart air conditioner can save up to 25 percent in energy and 30 percent in costs,” he said.

Other sections of the Microsoft CEO’s speech were centered around the need to use artificial intelligence responsibly.

“We need to ask ourselves not only what computers can do, but what computers should do,” he said, addressing an audience of over 1,500 programmers and businesspeople.

He also spoke of the necessity to find ways to develop AI for “people who don’t have the ability to participate” in the digital economy.

As an example, Nadella shared the case of Korea University Prof. Lee Seong-whan using Microsoft’s deep learning Cognitive Toolkit. Lee, who heads the brain and cognitive engineering department, analyzes brain signals in the development of computer systems that amputees can use to move prosthetic arms or robotic arms.

Earlier on Tuesday, Samsung hosted “Tech Forum 2018,” an event for developers in Silicon Valley. Around 150 developers and designers were invited to the Samsung Research America center there.

Kim Hyun-suk, president and CEO of Samsung’s consumer electronics division, said in opening remarks that the company was developing many “unfamiliar acquaintances,” which he believes will shape Samsung’s future innovation.

“Samsung encounters a vast number of customers, rapidly changing technologies and new staff from various backgrounds,” he said. “Our strength is in selling more than 500 million consumer devices a year. We will expand contact points with our customers to reach into the smallest corners of their living spaces and bring innovation to their lifestyles in general.”

Kim added that in terms of working with various employees, the company will continue to develop a corporate culture where global staff can cooperate and freely suggest ideas. Samsung also introduced the company’s developments in future technologies and held open discussions.