Abundant Thanksgiving feasts come to Seoul: Those yearning to enjoy a large American-style holiday meal don’t have to look far this year

Abundant Thanksgiving feasts come to Seoul: Those yearning to enjoy a large American-style holiday meal don’t have to look far this year 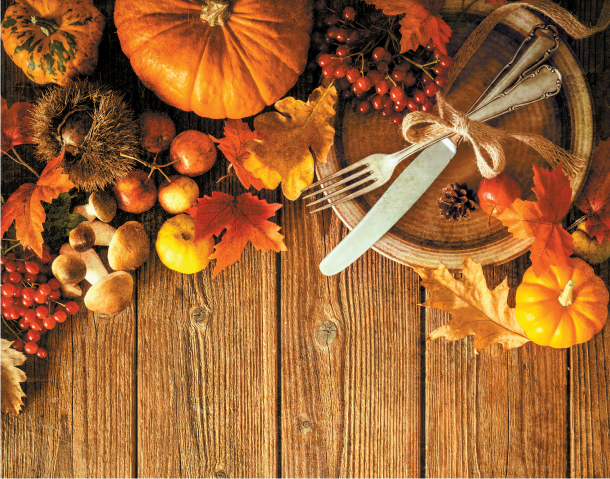 Local foodies grab on to any chance they can to get their hands on the city’s most delicious food, especially seasonal treats they can’t get any other time of the year. In time for the American holiday season, Seoulites are busy looking for options to fill up their tabletops with an American style feast.

Thanksgiving, which falls on the third Thursday of November each year, is when Americans get together with family and friends to eat with one another and give thanks for a successful harvest. Most Thanksgiving tables feature a large turkey roast, alongside numerous side dishes, similar to the endless number of seasonal foods that are served around Chuseok, the Korean equivalent of the holiday.

The turkey is usually placed at the center of the table along with stuffing, usually put together with different vegetables, apples, croutons and sausage. Stir-fried brussels sprouts with bacon, mashed potato, are served together with gravy and cranberry sauce to make for a single bite mixed with everything on the table. Usually the dinner ends with pies, especially pumpkin or pecan, alongside a scoop of vanilla ice cream.

All the food is served to be shared and diners are encouraged to take as much as they want for their plate. Similar dishes are also served for Christmas as well. The leftovers are usually used to make a sandwich later on: some even argue that a leftover sandwich is the best part of Thanksgiving, as seen in an episode of the widely popular American TV program “Friends,” which introduced many Koreans to the holiday.

Although the holiday is not widely celebrated in Korea, some people who have previously spent time in the United States and have celebrated the holiday look for options to have their own American style feast at home or at a restaurant.

International chain hotels, which have many business travelers from all around the world, are leading a trend of bringing large holiday meals to Korea. These hotels either offer the chance to enjoy the meal at a hotel restaurant or provide a turkey package with different side dishes for home parties that don’t require much cooking or laborious preparations. The hotels not only offer take-out services but also provide delivery for an additional charge, so those hosting parties at home don’t need to worry about carrying heavy grocery bags back and forth from the store to their home.

The Grand InterContinental Seoul Parnas in southern Seoul has a take-out holiday turkey set available to order at its Grand Deli on the first floor until Dec. 31. Its package, featuring a six-kilogram turkey, costs 230,000 won ($203.70), including tax. Grand Hilton Seoul in northern Seoul offers its package for 250,000 won, but it requires customers to make a reservation at least two days in advance.

Many international hotel chains are offering locals a chance to enjoy American-style holiday feasts just in time for Thanksgiving, which falls on Thursday. From left: Turkey packages available from Westin Chosun Seoul, Grand Hyatt Seoul, Grand InterContinental Seoul Parnas, and Sheraton D-Cube City, which serves not only a roasted turkey, but also side dishes like mashed potatoes or stir-fried brussels sprouts to make your meal even more convenient. [EACH HOTEL]

Westin Chosun Seoul offers a surf and turf option that people can enjoy at the hotel’s restaurant, The Ninth Gate. Through Nov. 25, diners can enjoy a seafood tower made with lobsters, shrimps, sea urchins and more alongside a roasted turkey with side dishes like string bean casserole, roasted potatoes, kale salad and desserts like pecan pie. Bollinger champagne will also be provided for the dinner. It costs 600,000 won per person. Reservations are required two days in advance.

Restaurants all across Seoul are also getting into the holiday spirit and have started promoting their special Thanksgiving menus. Shybana, a chain restaurant that serves southern-style American food such as biscuits and gravy, will also offer its own American feast on Nov. 24 and 25. It will be a buffet style setting with turkey, pork ribs, mashed potatoes, mac and cheese, corn bread and many more. The dinner costs 39,000 won for adults and 19,000 for children under 12. Anyone under seven can eat for free. Four seating times are available on both days.

The buffet will be served at the restaurants’ two locations - inside the Seoul Finance Center in Gwanghwamun, central Seoul, and in Cheongdam-dong, southern Seoul.

After successfully hosting a popular Thanksgiving dinner last year, Koos Gastro Bar in Sinsa-dong, southern Seoul, is hosting a five-course dinner with ham, turkey and more on Saturday. It costs 80,000 won per person.

Janet’s Daily Kitchen, which previously ran a restaurant in Itaewon and hosted different private Thanksgiving dinners, is once again getting ready to offer American holiday food at Dinette, a restaurant located inside Namsan Chemistry in Gyeongridan, central Seoul. The dinner will be served on Nov. 24 and 25 and there will be two seatings each day at 4 and 7:30 p.m. The 69,000 won dinner will be served family style.