Kim attends his first weapons test in almost a year

Kim attends his first weapons test in almost a year 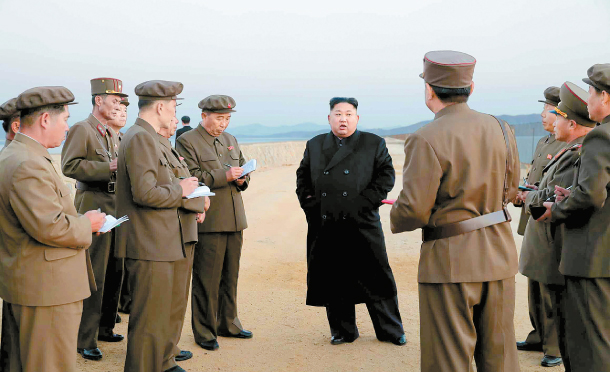 North Korea’s state media reported Friday that its leader, Kim Jong-un, supervised “a newly developed ultramodern tactical weapon test” at a defense institute, the first time in a year that Kim was officially described as overseeing a weapons experiment.

With denuclearization talks with the United States stalled, analysts believe Pyongyang is sending a warning to Washington that its patience is wearing thin. Little progress has been made on its demands: that the United States sign a formal declaration to end the 1950-53 Korean War, which ended in an armistice, not a peace treaty, and ease up on sanctions.

The United States has refused both carrots, urging the North to finally, fully and verifiably give up its nuclear weapons first.

No further details of the “ultramodern” weapon was given by the Korean Central News Agency (KCNA) Friday, nor did it specify the precise date of the test. But North Korean state media usually reports on the leader’s activities a day later for security reasons, which would mean the test occurred Thursday.

An English version of the KCNA report said the test was conducted “successfully” at the Academy of National Defense Science, and that Kim was “so excited” to have seen “great work” by defense scientists and munitions workers. Kim was quoted as saying the development of the weapon was directed “step by step” by his father, former leader Kim Jong-il, who died in December 2011.

“He [Kim Jong-un] added that the weapon is just like a posthumous weapon and he missed Kim Jong Il very much while seeing the great success of its test,” KCNA reported. The test, Kim Jong-un reportedly said, was “another striking demonstration of the validity of the [Workers’] Party policy of prioritizing defence science and technology and the rapidly developing defence capability of the country and as a decisive turn in bolstering the fighting capability of the Korean People’s Army.”

The last time North Korean media reported Kim’s attendance of a weapons test was on Nov. 29 last year, when the leader watched the launch of a Hwasong-15 intercontinental ballistic missile (ICBM). Pyongyang, at the time, announced it finally mastered its nuclear development program. Ever since, it has refrained from carrying out any nuclear or missile tests as it entered into negotiations with Seoul and Washington.

Local analysts said the regime appeared to have been careful in the KCNA article not to provoke Washington, especially U.S. President Donald Trump, who’s been bragging about his great relationship with Kim and the cessation of weapons tests since negotiations began.

For one, the KCNA report said Kim supervised a tactical weapon, not a strategic weapon. An official from the South’s Unification Ministry, which handles inter-Korean relations, said the government was assuming the North was referring to a conventional weapon, though further study was needed because the KCNA referred to the tactical weapon as being “ultramodern.”

The report also stressed the defensive nature of the weapon and refrained from hurling any threats at the United States or South Korea in contrast to past weapons tests.

The North’s official newspaper, Rodong Sinmun, ran a similar report on half of its second page Friday. In the past, Kim’s so-called supervisions of weapons tests usually made front-page headlines and continued to the second or third pages with a myriad of photos. Friday’s front page of the Rodong Sinmun was about Kim’s visit to Sinuiju, the capital of North Pyongan Province, to check the city’s urban planning and development.

In a separate KCNA report, the North reported on South Korean President Moon Jae-in’s recent gift of tangerines, saying a “large quantity of mandarins produced on Jeju Island” was sent by Moon to Kim. Kim was said to have expressed his gratitude to Moon and instructed the fruit be distributed to school children and Pyongyang citizens.

Moon reaffirmed policy of engagement with North Korea during a bilateral meeting with U.S. Vice President Mike Pence in Singapore Thursday on the sidelines of the East Asia Summit. Blue House spokesman Kim Eui-kyeom told reporters that Moon told Pence it was imperative to “specifically show” the North the bright future that awaits it if it denuclearizes.

Moon was also quoted as telling Pence that he would help both countries make progress in denuclearization and improving bilateral relations.

In a markedly different tone, the White House said in a statement about the same Moon-Pence meeting that the two men discussed the “ongoing efforts to accomplish our two countries’ mutual goals of achieving the final, fully verified denuclearization of North Korea, as agreed to by Chairman Kim [Jong-un],” and establishing a permanent peace on the Korean Peninsula. Both were said to have noted the importance of close coordination on North Korea-related matters, including on implementing sanctions and inter-Korean cooperation.

South Korea’s Unification Minister Cho Myoung-gyon, who kicked off a five-day visit to the United States on Tuesday to meet with American officials, said Thursday at a forum at the Woodrow Wilson Center in Washington that “real financial cooperation” between South and North Korea will only be possible after international sanctions are lifted.

Cho said it was “impossible” for South Korean companies and financial institutes to do business with North Korea under current circumstances, and that Seoul was adamant about financially engaging with the regime only after the “North Korean nuclear issue is handled.”

In a separate meeting with South Korean correspondents in Washington, Cho said 2019 would be a “very crucial” year for both Koreas.

“Both South Korea and the United States don’t have much on their political calendars next year,” said Cho. “North Korea, ahead of the 75th anniversary of the founding of the Workers’ Party in 2020, is in a situation where it has to show some kind of achievement in the economic sector to its people.”