Inter-Korean handball team to include soldiers from North

Inter-Korean handball team to include soldiers from North

The joint Korean handball team at next year’s men’s world handball championships will have four soldier-athletes from the North, the South’s head coach said Tuesday. 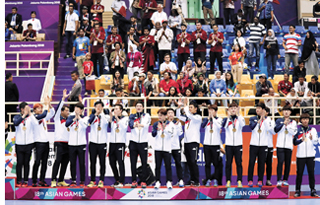 The Korean men’s handball team celebrates after winning bronze at the 2018 Asian Games in Jakarta on Aug. 31. [YONHAP]

Cho Young-shin said that the four North Korean players who will join the joint Korean team are soldiers, and they will team up with 16 South Korean athletes at the 2019 International Handball Federation (IHF) World Men’s Handball Championship, to be co-hosted by Germany and Denmark from Jan. 10-27.

The rosters are set at 16 players apiece, but the IHF allowed the pan-Korean team to add four players and compete with an expanded roster.

Cho is familiar with coaching solider-athletes. After all, he is an Army civilian who is currently head coach of the men’s handball team at the Korea Armed Forces Athletic Corps, better known as Sangmu.

But Cho said there will be no Sangmu players on the joint Korean team roster, so fans will not see soldiers from the Koreas working together on the court.

Cho, who recently led South Korea to the bronze medal at the 18th Asian Games in Indonesia, said he feels pressure and big responsibility ahead of the upcoming worlds.

“We’re in the worlds for the first time in six years,” he said. “In particular, we will compete as the joint Korean team, so it’s going to be an historic event, where we can attempt to revive men’s handball.”

South Korean players are scheduled to begin their training at the national training center in Jincheon County, North Chungcheong, in mid-December. The Korea Handball Federation (KHF) said it is still negotiating on the release date of the North Korean players.

The 2019 worlds features 24 teams divided into four groups of six. South Korea, ranked 19th in the world, qualified by finishing third at the Asian championships in January last year. But North Korea failed to qualify and has seen little international action of late.

The joint Korean team will face handball powerhouses from the group stage. The Koreans are in Group A with host Germany (first in the world rankings), Russia (fourth), France (fifth), Serbia (sixth) and Brazil (27th).

After round-robin action, the top three teams from each group will advance to the main round. Those 12 teams will then be divided into two groups of six, and the top two from each will move on to the semifinals.

“We’re in the group of death,” Cho said. “We’ll have to beef up our teamwork and need to give all-out efforts to play a good game.”

Despite difficulties, Cho vowed to deliver promising results at the worlds.

“It’s the coach’s job to find the best way to achieve the best result in any given situation, and that’s also the spirit of soldiers,” he said.