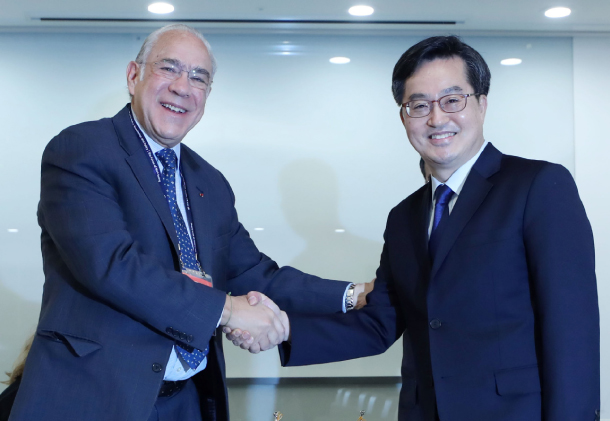 Organization for Economic Cooperation and Development (OECD) Secretary General Jose Angel Gurria asked Finance Minister Kim Dong-yeon for Korea to work with the international organization in protecting free trade, which has been threatened by trade conflicts and the rise of protectionism.

According to the Ministry of Finance and Economy Tuesday, the two held a meeting at the Songdo Conventia in Incheon. They discussed the increased need for mutual cooperation on global policies due to heightened external uncertainties. Concerns include the trade conflict between the United States and China and rising interest rates in the United States.

Kim said he supports the OECD’s efforts in trying to maintain the multinational cooperation system and keep protectionism from spreading further.

During the meeting, Gurria said he will support joint research between the Korea Development Institute (KDI), the state-owned think-tank, and the OECD on Korea’s inclusive growth policies. The two institutions will be conducting research on the Moon Jae-in administration’s economic and social initiatives next year.

Gurria also recognized the current administration’s efforts in trying to usher in peace on the peninsula.

The finance minister promised the Korean government will do its best to contribute to the success of the OECD’s Ministerial Council Meeting scheduled to be held in Paris, where the OECD headquarters is located, in May next year. Korea will be co-vice chair, a position shared with Canada. Slovakia will be the chair of the meeting. This is the fourth time Korea has been selected as a vice chair since the country became an OECD member in 1996.

The OCED secretary general was in Seoul to attend the organization’s sixth World Forum, jointly organized with Statistics Korea and held in Songdo, Incheon. The event, which kicked off on Tuesday under the theme “the future of well-being,” will be held through Nov. 29.