Updated G90 is rolled out as brand struggles

Updated G90 is rolled out as brand struggles 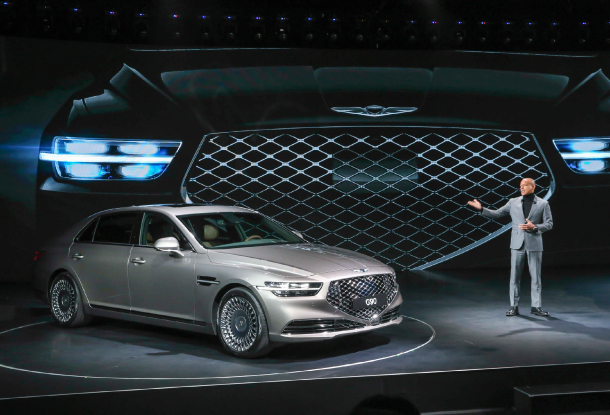 Hyundai Motor spinoff Genesis introduced a facelifted version of its flagship EQ900 - now globally named the G90 - in Seoul on Tuesday, hoping it will help boost sales of the luxury brand in the global markets.

The new model has already secured 6,700 orders in Korea.

The revamped G90 will hit the U.S. market in the first quarter of next year, according to Manfred Fitzgerald, head of the Genesis brand, at the launch event in central Seoul on Tuesday.

“We have three SUVs coming by 2021, but before that, we have to take care of the flagship sedan known here as EQ900,” Fitzgerald said. “The EQ900 will be called G90 around the world as we continue to strengthen the global brand identity.”

As the oldest and largest of the three sedan lines under Genesis - an independent brand spun off from Hyundai Motor in 2015 - the new G90 comes with high-end luxury features both inside and out.

Changes to the exterior are significant. Features reminiscent of the Equus - the former name of Genesis before the spinoff - are being shed, while design elements of the Genesis brand, such as the crest front grille and quad lamps, are being adopted.

The Genesis wing logo has been replaced by brand lettering boldly rendered. The logo motif is still evident in the rear lights - slim and horizontal-shaped lamps - where the shape of a wing can be seen.

Luc Donckerwolke, chief design officer at Hyundai Motor, said the strategy for the G90 “started with designing the light rather than form and shapes.”

The G90 comes with upgraded connectivity and smart technology. Lee Won-hee, CEO of Hyundai Motor, said at the event that the latest smart technology and design identity has been incorporated into the Genesis G90.

The car’s navigation is displayed on a 12.3-inch screen, while software systems will utilize an “Over the Air Update” (OTA) feature.

The OTA can upgrade navigation even when the car is operating. The new information will be reflected the next time a driver turns on the engine. Using a machine learning system, the car will be able to analyze the driving patterns of the operator to provide useful information for maintenance.

Utilizing information from the navigation, the vehicle will manage the air quality by closing windows or block the inflow of air from outside when passing through tunnels or areas with bad air quality.

Three gasoline engine options are available: the 3.8-liter, the 3.3-liter turbo and the 5.0-liter.

The Genesis line has been struggling to stay afloat in a global auto market, where the trend has largely shifted to SUV models. The brand offers only sedans.

Genesis has launched in global markets including the United States, Canada, Russia and Middle East. A total of 9,281 units were sold in the United States in 2018 through October, down 45 percent from the same period in 2017.