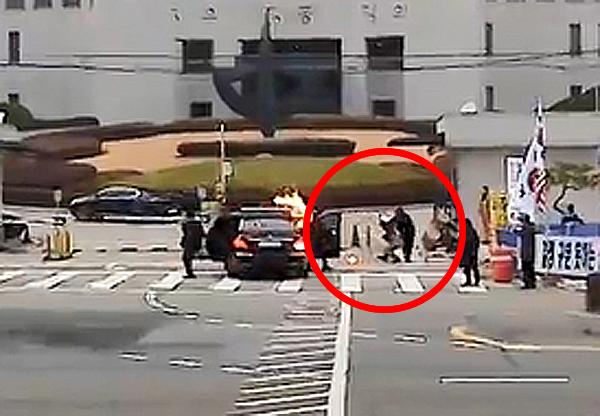 A pig farmer who threw a Molotov cocktail at a Supreme Court chief justice on Tuesday was apparently motivated by personal revenge after the court ruled against him in a civil suit.

The suspect, a 74-year-old man identified only by his surname Nam, lit and threw a bottle filled with paint thinner at Chief Justice Kim Myeong-su’s car as it passed through the gates of the Supreme Court building in southern Seoul at around 9:10 a.m. on Tuesday.

The bottle set fire to one of the front tires of Kim’s car as well as Nam’s body, but nearby security guards immediately used fire extinguishers to put out the flames.

The chief justice was not hurt in the incident.

Police immediately arrested Nam at the scene and found four other plastic bottles in his bag filled with paint thinner.

While disgruntled people often stage protests in front of the Supreme Court, the final court of appeals in most lawsuits, this is the first time that a justice has been attacked outside of the building.

As he was transferred by police from a local police office to the Seocho Police Precinct, Nam told reporters that he threw the firebomb in order to “recover his rights.”

Police said they are currently investigating the matter further to understand the suspect’s motives, but the Supreme Court confirmed that Nam had been staging a one-man protest since September.

Nam, a Gangwon resident, sued the National Agricultural Products Quality Management Service back in 2013 after it flagged animal feed he sold for not meeting environmental standards.

Nam claimed that the quality control agency falsified documents to come to the conclusion, and said he had suffered immense financial losses as a result. Neither a local court nor an appellate court agreed with such claims, and they subsequently ruled against him.

Angered by this supposed injustice, Nam filed for a final appeal with the Supreme Court in July and began a one-man protest in front of its office starting from Sept. 20. He demanded a meeting with Chief Justice Kim Myeong-su and National Court Administration head Ahn Chul-sang.

After he received no response from the court, Nam made various attempts to get its attention. He even jumped in front of Chief Justice Kim’s car in early October.

Analysts believe Nam decided to attack the justice after the Supreme Court ruled against him on Nov. 16.

While Nam’s attack may be an isolated incident, many legal analysts say it may reflect an overall decline in the judiciary’s prestige due to a recent power abuse scandal. Revelations that high-ranking judges allegedly colluded with the administration of former President Park Geun-hye in major civil suits have generally eroded the public’s confidence in the court.

Police added that they plan to increase security personnel around the Supreme Court building and the chief justice’s personal residence to prevent such incidents in the future.