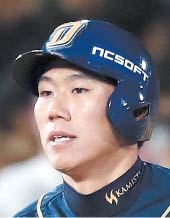 Mo is guaranteed to earn 1.7 billion won ($1.5 million) over the duration of his three-year contract, but he could actually take home as much as 2 billion won. Mo will receive 800 million won for signing and 300 million won as annual income. If he fulfills the requirements mentioned in his contract, he may earn an additional 100 million won each year.

“I’m thankful to all the staff members for allowing me to continue playing for the Dinos,” Mo said. “As a veteran player, I’ll provide the team with the environment that our managers are looking for.”

Mo made his KBO debut with the SK Wyverns in 2008. He was traded to the Dinos in 2013 and that’s when he started becoming a notable player in the KBO. Mo had his best career season in 2017, a .312 batting average with 17 home runs and 90 RBIs in 136 games. This was good enough to secure his spot in the batting lineup.

Although Mo had to miss 11 weeks at the beginning of the 2018 season due to an injury, he still managed to hit 17 home runs and 62 RBIs with a .279 batting average.

“Mo Chang-min is a player who has the potential to make big hits,” said Kim Jong-moon, general manager of the Dinos. “Since he’s been a great role model, I expect him to play a role that allows the veterans and young players to show great teamwork.”